This week's sidekick type is - Notorious 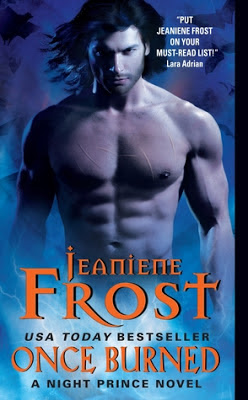 Vlad Tepesh is brought in as the 'my enemy's foe is my ally' type of character since he doesn't get along with Bones. They have to make it work. I really enjoy this aspect because it's a lot of fun to watch Cat become friends with him, while Bones is moping because he knows he's the only one who can't stand him any longer. I grew to enjoy him a lot. He is a good friend to Cat and very attractive even though she doesn't look at him that way. The reason he is notorious is because he is Dracula, but don't call him that. I LOVE that he got to star in a few books of his own in a spin-off by Frost. The new one Twice Tempted (Night Prince #2) comes out March 26th.

“You arrogant...” thrust through the stomach of a snapping zombie, twisting and using all my strength to cleave him in half “... over published...” wasn't going to work, it clawed at the blade, and my God, these things were tough, “...showy old bat...” Crack! There went my head into the wall. If I didn't have a split skull, I'd be amazed. “What are you waiting for? Aren't you the king of all bogeymen? The legend children fear will devour them if they don't behave?”
“Come on, Vlad, live up to your reputation! If you can't burn to death one Egyptian vampire chained to a wall, how did you ever drive the Turks from Romania?”

“Slumber party with Dracula, all things considered why not?”

“Does no one think to warn people before they meet me?" Vlad muttered, shooting an irritable look at Mencheres.”

“Get stuffed, don't you have more publicity stunts to pull?" Bones shot back. "How about chatting with another writer who can smear your name into greater popularity?"
"What, did Anne Rice not return your calls, mate?" Vlad asked scathingly. "Jealousy is such an ugly trait.”

“Much slower, I turned around to see Vlad examining his fingernails, as if his hands weren't still ablaze in the flames that had blasted the ghoul's head off moments before.
'what the hell was that?' I gasped.
'Premature inflammation,' He replied. 'Happens sometimes. Very embarrassing, I don't like to talk about it.' ”