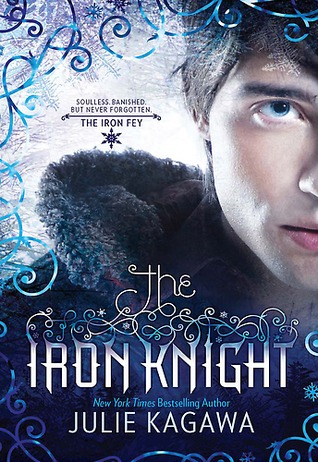 Goodreads Summary
"My name--my True Name--is Ashallayn' darkmyr Tallyn. I am the last remaining son of Mab, Queen of the Unseelie Court. And I am dead to her. My fall began, as many stories do, with a girl..."To cold faery prince Ash, love was a weakness for mortals and fools. His own love had died a horrible death, killing any gentler feelings the Winter prince might have had. Or so he thought.

Then Meghan Chase--a half human, half fey slip of a girl--smashed through his barricades, binding him to her irrevocably with his oath to be her knight. And when all of Faery nearly fell to the Iron fey, she severed their bond to save his life. Meghan is now the Iron Queen, ruler of a realm where no Winter or Summer fey can survive.

With the unwelcome company of his archrival, Summer Court prankster Puck, and the infuriating cait sith Grimalkin, Ash begins a journey he is bound to see through to its end--a quest to find a way to honor his vow to stand by Meghan's side.

To survive in the Iron Realm, Ash must have a soul and a mortal body. But the tests he must face to earn these things are impossible. And along the way Ash learns something that changes everything. A truth that challenges his darkest beliefs and shows him that, sometimes, it takes more than courage to make the ultimate sacrifice.

To Fulfill a Promise

This book was so different from the rest in the series because I was in Prince Ash's head for the duration. I will say that Kagawa does a great job of letting you know that you are with another character because the writing style was distinctive and Ash doesn't think like Meghan does so the story feels altered. It will be hard for me to review this the way that I would like to simply for spoiler's sake.


I love Ash. Getting to see how he ticks was like opening my presents on Christmas morning. He is not all unicorns and glitter, but would I want him to be? Of course not. He has some major regrets, and he should as he has done some terrible things in his lifetime. He has doubts like I do. He constantly questions everything and is deeply thinking about how useful emotions are as well as which path is really the best for him. In short, it was a very realistic journey into his psyche. Did I get upset with him some while reading? Yes. Did I wince at some of the things I learned. Yes. In the end though, I am glad for every revelation, every doubt, and every obstacle that led to the conclusion of this book.

I also loved a new character that was introduced in this one. I don't want to say a whole lot about him and give too much away. He was the perfect off-set of Grimalkin and their banter was on par with Ash and Puck's. Speaking of, Puck on the ride with Ash for the sake of Meghan's happiness was something that had my skin tingling. I loved it. These two are so good together and watching their rivalry through the books has been a tough process when I want nothing more than them to be the best of buds. From the beginning with Puck antagonizing the witch (that I am assuming is the Baba Yaga), to the end with Puck going his separate way because he's angered Oberon again, I thoroughly enjoyed their deep-seated friendship even if they don't always see it themselves.

It's hard to say everything that I really loved about this book without too many spoilers. This was a journey for Ash so that he could be with his love again. It entailed most things that journeys do...battles, hard decisions, good traveling companions, and revelations. Kagawa's writing was beautifully done. There were times when I had no idea how this was going to end up, but she pulled it off perfectly.

There were slow moving parts as there often is in a book about a quest. I also wasn't too sure how I felt about the conflict that was added into this book. If you have read this one, you will know what I am talking about. In the end, I am glad it was done the way that it was, but I admit that I wasn't so sure how I felt about it at first.

Since Meghan and Ash are not together in this one the romance is really not a physical aspect so much as one that is in the mind keeping Ash going. It is more about what Ash really wants and what he is willing to do to achieve it. There are some small romantic scenes though.

This was a fantastic conclusion to this series. I feel like I loved it more book by book. Kagawa knows how to get you fully invested into her characters and make you really want to root for them. Especially the side characters which I love more than I think any other series I've read. Recommended for anyone that enjoys paranormal reads.

“There is a reason the Winter Court freezes out their emotions, why feelings are considered a weakness and a folly among the Unseelie fey. Emotion corrupts the senses, makes them weak, makes them disloyal to kith and court."

"There are only seven of them." Drawing my sword, I stepped out of the trees and started toward the camp. Puck sighed.
"Or we could do the old kick-in-the-door approach " he muttered, falling into step beside me. "Silly me, thinking there was another way.

"What do you think?" He bared his fangs at me. "Be careful, boy. In some tales, the hero gets eaten by the monster after all."

"Yeah, your perfect kitty vision does us no good if you don't warn us that something is coming once in a while. Poofing away doesn't count. This way, we can at least have a heads-up."
The cat thumped his tail.
"Additionally, you can paint a neon sign over our heads that says, 'Easy meal, follow the flashing lights.'"
"Or we could use you for bait..."

"Wow," Puck muttered, dusting off the front of his shirt, "now, that was weird. And to think, I never thought I'd live to see the day..." He trailed off, grinning.
I eyed him wearily. "Fine, I'll bite. You don't mean the scorpions or the sphinx. We've seen much stranger than that."
"No, ice-boy. I never thought I'd see the day when Grimalkin was wrong."
Grimalkin, still on his broken pillar, didn't react, but I saw his whiskers bristle as he glanced our way. "Goodfellow," he said with an enormous yawn, "I feel obliged to point out that, had I been wrong, you would all be full of tiny holes right now. Anyway, we are wasting time. I suggest we move out, quickly.
Posted by JezzebellJC at 11:46 PM