This week is the St. Patty's Day Edition

My choice is the leprechaun from The Hollows 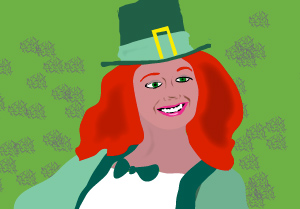 I can't think of another one that has a leprechaun...if you know one, please let me know!

This one works at The Blood and Brew pub and starts out the story as Rachel's first run is to nab the tax-evading leprechaun. She gives Rachel three wishes which really get the story moving and even come back later. Although she seems like a character that I wouldn't see again, she does pop up in later books. Basically, I think she is the catalyst for the series.

"No! Wait!" the leprechaun shouted as I grabbed my bag and hauled her butt to the door. "Wishes! Three wishes. Right? You let me go, and you get three wishes."