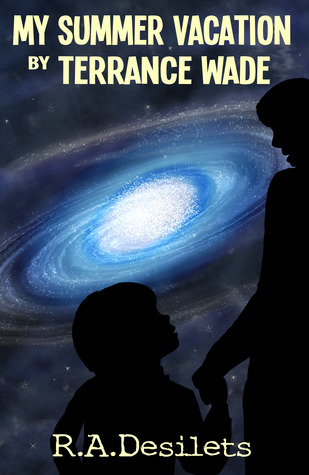 Goodreads Summary
When Terrance's mother comes in through the window, she says, "Terrance, your dad doesn't want me to show you the world. But we're going - tonight, now." With that, she scoops him up and rushes from the house. Terrance, a naive yet astute 7-year-old, is kidnapped by his mother. Told from his perspective, Terrance believes he's on an adventure to save the world in this short, witty novelette.

This is a fun quick read told from the point of view of 7-year-old Terrance, but with an adult overtone that is a completely separate story than the summer vacation that he lives out. My 10 year old son and I both read it and I'm doing a quick review as well as an interview with Zane.


My Summer Vacation with Terrance Wade is an interesting read about a vacation that a boy takes with his mother. It moves at a nice pace and the characters are intriguing. There was an air of mystery to the story that was quite fun. This is because the story is told from the point of view of 7-year-old, Terrance, as a school assignment about his summer vacation. As an adult, I can tell that his mom is taking him without permission since there are cops involved and she sneaks him out of a window, but to Terrance it is all part of a grand adventure with his mom the Super Agent Ninja Robot.

Terrance repeatedly says he knows his mom isn't crazy so he is making up things to have them make sense. It is a very funny ride. I enjoyed jumping into the mind of a 7-year-old and the innocence of him thinking that his mother could take on the world. I like hearing about diabeetles and his mom's 'eat your spinach' look.

It's a very short read and I usually prefer longer books that are in a series.

My favorite parts of this story are the prologue and the epilogue (you'd have to read for that to really make sense). It is a nice, funny, short story about a boy who saves the world while seeing a situation in a completely different light than what it is.

R.A. Desilets graciously let me have my 10-year-old, Zane, read the book and I interviewed him for his thoughts.


JC: The book starts off with Terrance’s mother taking him on a trip...tell me a little bit about it.
Zane: Well, he goes to Paris, France to save the world from aliens.

JC: Why doesn’t his dad go on the trip with them?
Zane: Because his dad doesn’t want him to see the world.

JC: That doesn't sound very nice. How old is Terrance and does he act his age?
Zane: About 7 and yes he does usually act his age. He even calls his backpack Duckie.

JC: Tell me about this backpack:
Zane: It is extremely important and I’m not going to spoil the story.

JC: Mmmm hmmm. What was your favorite part while reading?
Zane: Everything he calls his mom…from a secret agent to a ninja pirate.

JC: What was your least favorite part of the book?
[he sits and thinks for five minutes and comes up with nothing]


JC: What are your final thoughts on the book?

Zane: I would give it 4 stars, I really liked it!


“She’s testing me to find out if someday I will be able to be a secret agent ninja pirate robot like she is.”

“I tug on her shoulder because I think she took some money from the board game that we have back at home. Why else would it look so fake? She ignores me”
Posted by JezzebellJC at 12:00 AM