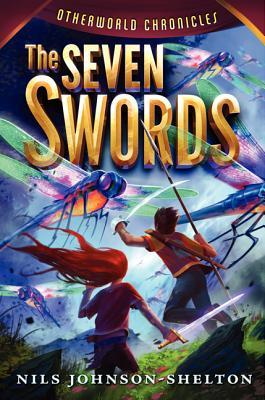 Goodreads Summary
Across both worlds are seven legendary blades. Some have been uncovered, Some forgotten, Others secreted away.

Very soon all must be united.

Spending the summer fighting dragons, rescuing wizards, and leaping through portals into the Otherworld was only the beginning for Artie and Kay Kingfisher. The two worlds remain divided, Merlin is missing, and worst of all, Qwon Onakea, their kidnapped friend, may be lost to the Otherworld forever. It seems the only way to save both worlds—and to save his friends—is for Artie to claim his throne as King Arthur reborn.

To do this, Artie must gather his knights so they can venture forth and recover each of the Seven Swords. Finding them all is Artie's only hope for victory.

But all the video games in the world haven't prepared Artie for the battles to come against giants, dragons, ogres, and sorcerers. Nor is he ready for the unexpected threat of the Peace Sword, a mysterious weapon used by the treacherous Mordred to kill the original King Arthur more than a thousand years ago....

He's on His Side

The Seven Swords is a fun follow-up to The Invisible Tower. Artie and his knights are looking for seven swords so they can reach Avalon and Artie can become King.


Artie is a teenager that loves video games who found out in the first book that he is the reincarnation of King Arthur. His sister Kay is one of his knights as well as a group of other friends they made in the first book.

I really enjoyed the parts with Qwon where she was being held by Dred along with the fairy Shallot. The fairies in this story expel scents that have different effects on their victims. Shallot has an incredibly sweet scent that renders people stupified. Dred appears to have a crush on Qwon so he doesn't make the best kidnapper. Given that he's doing it at his mother's insistence doesn't really help matters either.

Dred's mother is the evil witch Morgaine. She is their nemesis and is trying to have Qwon killed so she can get Artie there and retrieve his swords. I love Dred's growth in this book as he goes from just doing what he is told in the beginning to really questioning morals and who he should be by the end.

Artie, Kay, and the group are still a lot of fun and the action starts early in the book. Johnson-Shelton is great at making me laugh aloud while reading. Also, there is a mysteriousness surrounding Merlin that adds layers to an already known character which I really enjoyed.

I also loved the chapter titles which normally I do not even pay attention to! A couple of examples include: Chapter 1 In Which Qwon Thinks She is in Canada and Chapter 13 Concerning a Bunch of Stuff Including a Surprise for Kynder.

I wasn't really a fan of how this one ended. It was a complete cliff-hanger in my opinion and left me wanting the next book pronto.

Since these are Middle Grade books there is no romance really to speak of other than some crushes. Artie really likes Qwon and this one throws a wrench in his plans when it appears that Dred does as well. Also Kay has a crush on guy knight Erik Erikson.

This is a really fun read that is pretty quick to get through. It picks up where the other lets off well and dives into action rather early. It moves at a great pace and is light-hearted and funny. Definitely recommended for anyone that enjoys a Middle Grade read.

They'd been moving fast for about thirty minutes when Kay said, "I feel like we're in the second Lord of the Rings movie!"
"At least we're not hunting orcs," Artie said, taking a gulp of water from his canteen.
"You said it, Bro," Kay replied, winking at her brother.
Erik didn't say anything. Since dragons existed, orcs probably did too. He hadn't even thought of that. Erik didn't want to meet an orc. Ever.