The Eternity Cure (Blood of Eden #2) by Julie Kagawa

Bristling, I was about to tell him what he could do with his reason, when a noise stopped me. A soft noise. One that, for whatever reason, raised the hair on the back of my neck. 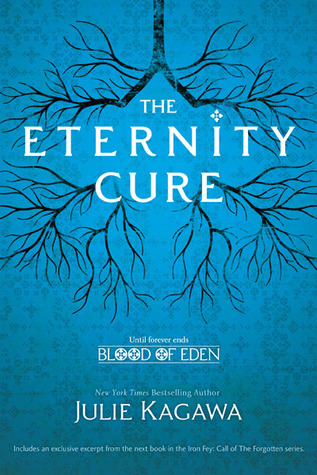 Out here in the Fringes, there is only one rule: Blood calls to blood. She has done the unthinkable: died so she might continue to live. Now Allie, the reluctant teenage vampire who was cast out of Eden, and Zeke, the human boy who loves her, must attempt to save the world from a deadly new strain of plague. In order to do so, they must first hunt down the monster who holds the promise of the cure—and Allie’s beloved mentor—in his sadistic grip…. Joined by Allie’s blood brother, Jackal, this unlikely posse of companions will brave a landscape stalked by raiders, rabids, and rogue vampires. But even if they survive, they’re bound for the Inner city, and a vicious showdown that will test their bonds in ways they never expected. It may just be that becoming undead was the easy part. Confronting the horrors of Allie’s awakening hunger, her growing feelings for Zeke, and the uncertainties of their future is going to be the ultimate challenge.

Posted by JezzebellJC at 8:30 PM