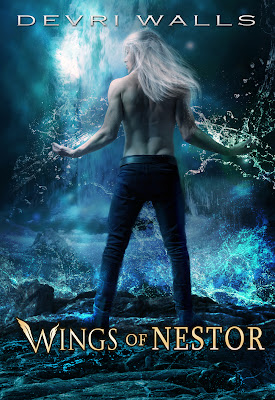 Cover Reveal of Wings of Nestor by Devri Walls


For some behind the scenes shots, as well as the progression from raw photo to final cover go to writingmyfuture.com.

Kiora needs answers. Who is the Shadow? Who is Jasmine? Are they connected? And even more pressing: how can she stop Shadow from using Kiora’s dreams as a map to find them? They have escaped three times, but are living on borrowed time—and everybody knows it.
Her search for help will push her closer to Alcander, send her to the dragon mountain of Toopai, and straight back to Meros—where magic will finally return to the land of no magic. Answers will be uncovered and plans unearthed that have been waiting for thousands of years.
But with the Shadow’s forces gathering, it looks like the land’s path is hurtling towards one outcome: war with the Shadow and death to all rebels. Armed with knowledge and hope, Kiora is determined to change that path. But will fate allow it? Or will it deal her a hard lesson about following ones own destiny?

Devri Walls lives in Kuna, ID with her husband, two kids and one very bouncy lab. After suffering from an abundance of creativity with not enough places to put it, she turned to writing. Which in the end, turned out to be exactly where she should have been putting it all along.