This week's sidekick type is - Foreign 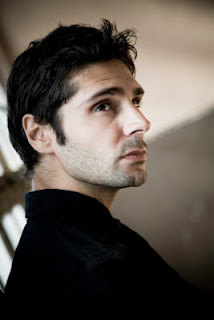 Vayl is Jaz's vampire partner and they make quite a crime fighting pair. Vayl is so wonderful because its so difficult to get beneath his handsome surface. Bit by bit and lip twitch by laugh that is confused with burp or cough, I saw him shine through the pages in the series and he became one of my favorite parts to the story. He is so uptight in the beginning of the series, so proper and/or refined and it was such a joy to watch Jaz rub off on him. He is of Romanian descent.

“What happened?" asked Vayl.
"Cirilai hurt me. I think that means you're about to blow," I said.
He nodded, his eyes fading rapidly to black. "Deal with that," he said, his finger-flick indicating that if I didn't do something with Aaron, he'd have to. And it wouldn't be pretty.
“Excellent."
As soon as Bergman left earshot Vayl said, "I am going to buy you some pom-poms and a short pleated skirt-"
Hey, if Bergman needs a cheerleader, that's what he's getting."
Vayl tipped his head to one side and smiled wickedly. "I was just thinking perhaps I need a cheerleader as well."
Cassandra got up. "If that's where this conversation is headed, I'm leaving."
She wants some pom-poms too," I told Vayl.
I do not!”

“Cole!" Cassandra smacked him on the shoulder.
"Wha-?" When he opened his mouth all you could see was half-chewed goo.
"How old are you?" I demanded. I threw shrimp at him and it got stuck in his tangle of wig hair. Bergman fished it out, wiped it off, and put it back on the serving dish.
"Now, that's disgusting," said Cassandra.
"Children!" Vayl's voice boomed in our ears, loud and sudden enough to make us all jump guiltily. "I trust you are all preforming actual work right now."
"Chill out, Vayl," I replied. "Bergman is just conducting an experiment to see how vampires respond to ingesting brown hair dye."
"That makes me curious, Vayl," said Cole in a sticky, goodie-between-the-gums voice that reminded me of Winnie the Pooh after a major honey binge. "Have you ever colored your hair? You know blonds have more fun."
"Not when they are in the hospital.”