This week is Cowboy

My choice is Warren
The Mercy Thompson Series by Patricia Briggs 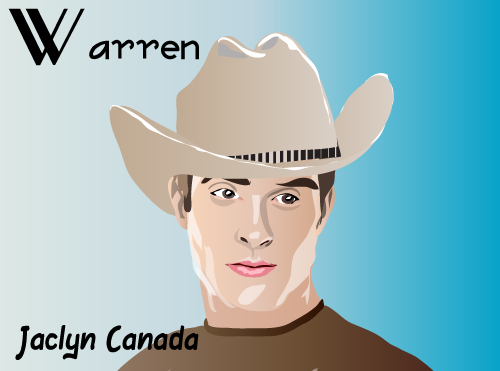 Warren is the 3rd in the Tri-Cities Werewolf Pack. Dominant enough to be the 2nd, but with a stigma hanging over his head of being homosexual, he remains humbly in the 3rd rank. He was a straight-up Texan cowboy, and that's the way I always picture him while reading. I love Warren! His movie nights with Mercy and Kyle are always so much fun, and he just has a quiet strength about him that makes him such a fun character to read. He's a true best friend to Mercy, and someone that she counts on to have her back. He has that Southern gentleman charm, and he's not hard to please.


Iron Kissed-
A second floor window opened, and Kyle stuck his head and shoulders out so he could look down at us. “If you two are finished playing Cowboy and Indian out there, some of us would like to get their beauty sleep.”

I looked at Warren. “You heard ‘um Kemo Sabe. Me go to my little wigwam and get ‘um shut-eye.”

“How come you always get to play the Indian?” whined Warren, deadpan.


Iron Kissed-
“A cowboy, a lawyer, and a mechanic watched Queen of the Damned,” I murmured.
Warren—who had once, a long time ago, been a cowboy—snickered and wiggled his bare feet. “It could be the beginning of either a bad joke or a horror story."


Blood Bound-
“Warren made a noise, the first one I'd heard out of him since we'd come into the room. I'd have been happier if he hadn't sounded scared.
"Easy, Warren," Adam told him. "You're safe here.”
"If you die on us, you won't be," said Kyle with a growl that would have done credit to any of the werewolves in the room.

Follow my blog with Bloglovin
Posted by JezzebellJC at 12:35 AM