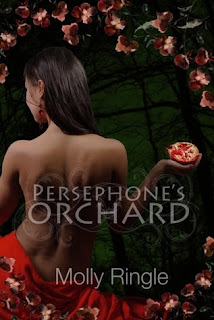 The Greek gods never actually existed. Did they? Sophie Darrow finds she was wrong about that assumption when she's pulled into the spirit realm, complete with an Underworld, on her first day at college. Adrian, the mysterious young man who brought her there, simply wants her to taste a pomegranate.

Soon, though she returns to her regular life, her mind begins exploding with dreams and memories of ancient times; of a love between two Greeks named Persephone and Hades. But lethal danger has always surrounded the immortals, and now that she's tainted with the Underworld's magic, that danger is drawing closer to Sophie.

Get it TODAY on Kindle (last day for this price) at Amazon for 99 cents!! Click here ->
Persephone's Orchard (The Chrysomelia Stories)

Would you eat a magical pomegranate?

I LOVE reading about Greek Gods tremendously. I'm even a fan of some of the lesser known ones like Hestia, and writing this is making me realize that there is a book on my shelf that I need to read now. But back to business - Greek Gods are another thing like vampires and werewolves that authors truly make their own. They can select from a wide-array of source material and work from there. Ringle took Hades and Persephone's tale and made me fall in love with it.

What I'm going to find difficult is reviewing this book without giving the story away. So I apologize ahead of time if it doesn't make sense because you guys know I don't like to spoil a story.

Adrian is such an endearing character with a touch of mischief. He's lonely and he wants his love. He has had a hard life yet he does what he can for others in the one real way that he can. Sophie is more spontaneous, but she too worries about those she loves and wants to take care of them. They meet under strange circumstances and it was a lot of fun because Persephone's Orchard had some action and a little mystery going from the very first page.

Ringle did such a marvelous job with a Persephone and Hade's story that I now refuse to accept any other explanation of events for them. In this book, there are flashbacks to old-world times mixed with modern day, and it was flawlessly done. The supporting cast with Nikolaos, Freta, and Rhea were so important and also very well-developed.

I love the Underworld! Everything about the picture Ringle creates and the way that things work. Also, the antagonists are very good at what they do in the story and they keep the action and suspense going. There is an air of mystery throughout. Even when I found out one piece of information, I was given a new mystery to ponder to keep those pages turning.

Sophie has a bit of a spontaneous streak to her, or at least a quick answer and I often questioned her decision-making abilities. Though one big decision she dragged her feet so long, I was beginning to wonder if she would make a choice at all. I'm not saying that she shouldn't have taking her time making the decision, because she certainly should have. It just seemed a tad out of character with how I had her figured out in my mind.

What a romance! This one is all about the emotional connection, not so much the touchy feely, although there are kissing/make-out scenes. I love everything from how the characters come together to how everything is revealed. I love the questions and even at times distrust and wonder. I also really enjoy the absolute feeling of "rightness" that the two of them together seem to create.

You don't want to miss this one! If you enjoy reading about Greek Gods, the unique spin on this tale, action, mystery and romance will keep you turning page after page until you reach the spectacular ending that has you asking Ringle, "Where are on Earth is the sequel?" Definitely recommended.

"You and your friends go back to your other dimension or whatever you call it, and stay there. Show up among humans again and you're dead. Understood?"
"We are human." ARC Location 45

"Do something to fix it, and if you can't then do something else to make your life better. Tell you what, crying isn't going to fix it." ARC Location 80

As she debated whether to worry about that later and stick her thumbs in his eyes now, Nikolaos pinned her to the lumpy ground, grinning. "That was easy. We must teach you to be less trusting." ARC Location 167

"I told you. They want to kill me. And Niko, and the few others like us. But they wouldn't get a lot of help from normal people, would they, if they led with, 'We want to hunt down immortals and blow them up into tiny pieces.'" ARC Location 1882
Posted by JezzebellJC at 12:00 AM