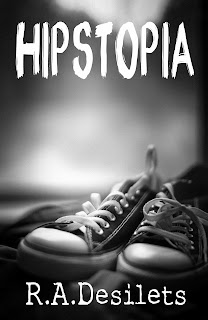 Hipstopia is the first book in Young Adult Dystopian duet, The Uprising.

Charismatic Murphy inspired a bunch of hipsters from Silverlake to stand against 'corporate personhood', and they chased out everyone who believed in it. With his biggest glasses, he created his own little pocket of hipsters built on being fashionable, changed their names to end in a more lyrical 'y' and have no televisions. This story is about Jay, his right-hand man. Jay smokes all day instead of eating, loves that everything is done locally and that he doesn't have to make decisions, and at the age of 18 he has never had a girlfriend. In this novelette, I watched him grow, questioning everything he'd known, and finally become a man.

I'm not a huge fan of novelettes in general. There just aren't enough pages in my opinion. However, I absorb Desilets writing like a sponge and love every minute of it. Do I pine for more when it's over? Yes! She is able to create a well-wrapped up story in a novelette. When I'm finished reading, I feel like I've gotten all the facts that I needed, even while I wish the story would continue. Thankfully, this one has a second, full-length book coming to follow it up in this series.

I'm amazed at how Desilets can take this concept and turn it into a mixture of absurdity and honesty, thoughtfulness and comedy. I'm giggling at these kids saying they won't do something because 'it's not fashionable', but at the same time there are poignant moments where true emotion comes out in the characters. It's a dystopain built on a unique and silly world with real characters and feelings. Also, even though it's not categorized as New Adult, I feel that it could easily be classed as that since it's a coming of age story about Jay and his growth. I love everything about how the mixtures came together to create a great story.

There is insta-love, or rather insta-crush. Given that this is a novelette, there's not a lot of pages to get the romance going, so I understand the need to have it develop rather quickly.

Jay is immediately drawn to Prisoner Forty-Seven. Never having had a girlfriend, it's easy to see why he would become quickly attached to her. Prisoner Forty-Seven is the catalyst that turns Jay on his head. She's fierce, smart, and beautiful, and he needs to be close to her. I love this character! She is exactly what he needs and he didn't even know he was missing anything.

I really hope you give this one a shot. With the follow-up full length book, this series is one to add to your too-read shelf. It's incredibly unique, very well-written, funny, honest, and enjoyable.

If anyone asked why Murphy was the ruler, I would say it was because he had the thickest glasses of us all.

We didn't hit people to kill them; killing them wasn't fashionable.

I ran back to Los Angeles. I ran away from Corpo Country, because I hated the idea that my own flesh and blood would force me into living a certain way, that they would take away my choice.

I ashed the end of my cigarette, which had already burned halfway through. I inhaled, wishing for real food to magically appear out of thin air. My stomach growled at the thought. What was wrong with me?

Forty-Seven, the girl with fierce, cutting eyes that would make me forget today ever happened. As soon as I got to the cells and started to handout meals to the other prisoners, I realized I didn't want to forget today.
Posted by JezzebellJC at 12:00 AM