*Please note that it is very hard to review books past the first one in the series without having any spoilers at all. I will try to keep it as spoiler free as I can. 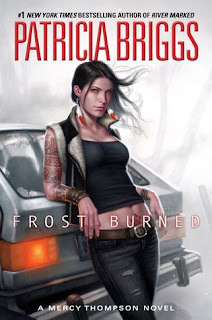 Mercy Thompson’s life has undergone a seismic change. Becoming the mate of Adam Hauptman—the charismatic Alpha of the local werewolf pack—has made her a stepmother to his daughter Jesse, a relationship that brings moments of blissful normalcy to Mercy’s life. But on the edges of humanity, what passes for a minor mishap on an ordinary day can turn into so much more…

After an accident in bumper-to-bumper traffic, Mercy and Jesse can’t reach Adam—or anyone else in the pack for that matter. They’ve all been abducted.


Through their mating bond, all Mercy knows is that Adam is angry and in pain. With the werewolves fighting a political battle to gain acceptance from the public, Mercy fears Adam’s disappearance may be related—and that he and the pack are in serious danger. Outclassed and on her own, Mercy may be forced to seek assistance from any ally she can get, no matter how unlikely.

I actually thought that River Marked was the last book in the series, so when I found about this one, I was thrilled. I adore everything about the these books!

What's funny about Mercy is that in the beginning of the series, she knew werewolf decorum, but didn't follow it much at all because she's too stubborn to be considered a lowly coyote. Now that she's the Alpha's Mate, she quotes the "rule book" like she wrote it. Not necessarily to suit her, but because these are her wolves now and she cares about every single one - even the ones that hate her. I love that she's embraced the good with the bad.

When Adam gets in to trouble this time, Mercy calls on a group of old friends to help. Stefan is one of my favorite enigmatic characters, with his Scooby Doo references but scary vampire ways, he's a character I never will fully understand, but continue to love. Zee is also briefly there lending a grumpy, but knowledgeable helping hand. Someone I loved getting to learn more about that we haven't seen much in earlier books was Zee's son, Tad. He actually plays a fairly large roll in this one. Ben got to be around quite a bit too, taking the place of wolf-by-Mercy's side, Sam. I couldn't stand Ben in the beginning of the series, but as each layer is peeled off, I love him more and more with every new book. One of the new characters Asil was fantastic! I love his history and just not knowing what he was going to do.

The story is a great one! It's a page turner that goes from one mishap to another and the book was over far faster than I really wanted it to be. The action, drama, and sequence of events was dead-on.

Well, these two are still incredibly in love which I'm thankful for. They don't need any fights or arguments splitting them up. The problem may be with the fact that they weren't together much so there was a little romance, but not a whole lot. Seeing the few chapters through Adam's POV really was fantastic though! I can tell how much they both truly care for each other.

It's excellent. If you love Urban Fantasies, it is a don't miss for sure. It has action, great characters, excellent flow, and a wonderful story with development.

"Nope. I know you haven't been part of this family long, so you don't know all the rules. When you break someone else's toy, you have to pay for it yourself."

"No more driving for you, tonight," the cop told the downed man cheerfully. "No more hitting nice ladies, either. It's off to the pokey to dry out." "Pokey?" I said.

I knew what Adam would say about turning on the lights when we were possibly hiding from some unknown group capable of taking on a pack of werewolves and coming out on top. But my night vision wasn't up to first aid in the dark.

It was like triage. Decision one - preserve those who were save. Decision two - retrieve the rest. Decision three - make the ones who took them regret it.

I decided to trust Ariana to know her own strengths. If she could keep us hidden until I talked to Adam, it would really help.
Posted by JezzebellJC at 2:09 PM