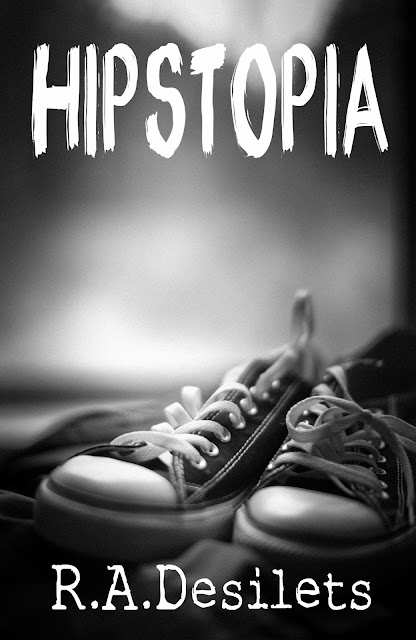 
Hey everyone! I'm happy to bring you the cover and a little more information about the novelette Hipstopia by R.A. Desilets. Most of you know that I don't often read novelettes because I prefer full-length novels, but I did a review for R.A.'s My Summer Vacation by Terrance Wade and found it very refreshing and a well-wrapped up story. Hipstopia is part of a duet called "The Uprising".

J.C.: Can you give me three words to describe Hipstopia?
R.A.: I think this phrase sums up Hipstopia pretty well, "Because it's fashionable."

J.C.: Will you tell me a little more about the world?
R.A.: Since this is told from Jay's perspective, it's only appropriate that I explain why he loves Hipstopia. He loves being fashionable without putting too much thought into it, and he loves how everything is done locally, without faceless corporations. Jay's the right-hand man to the charismatic Hipstopian leader, Murphy.  Jay respects him, not just because Murphy has the biggest glasses in Hipstopia. They built a world on being fashionable, and the first person to make Jay question his life is the outsider, Prisoner Forty-Seven.

J.C.: What was the inspiration behind it?
R.A.: I follow Courtney Summers on twitter (though, I am shamefully not on twitter as much as I probably should be). She tweeted about how she was waiting for a YA hipster dystopian novel.  It was a joke, but I responded with what is now a line in my book, "We don't do this because it's right or wrong. We don't do this for justice. We do this because it's fashionable."  Despite it being a joke, these characters started forming in my head, and I had to write their story.  I've always loved YA dystopian, but never had a reason to write it until now.

Rachel A. Desilets was born in southern New Hampshire. She graduated from Emerson College with a B.A. in Writing, Literature, and Publishing.

"My Summer Vacation by Terrance Wade" is her debut novelette, published in December 2012.

She currently resides in California with her husband and cats.