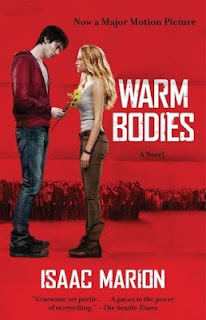 A zombie who yearns for a better life ends up falling in love—with a human—in this astonishingly original debut novel.

R is a zombie. He has no memories, no identity, and no pulse, but he has dreams. He doesn’t enjoy killing people; he enjoys riding escalators and listening to Frank Sinatra. He is a little different from his fellow Dead.

Not just another zombie novel, Warm Bodies is funny, scary, and deeply moving.

A Mixture of Eloquence and Cave-Man, Brains and Pad-Thai

I've been wanting to read this for quite some time now after seeing the review for it on Reading and Writing Urban Fantasy and Paranormal Romance and her quotes so I have included quite a few excerpts below. The movie looked so wonderful too, and I always like reading the books before seeing movies so I read this one before watching the movie with Melody.

This was one of those books that I absolutely didn't want to put down. The writing was so beautiful and the flow so easy to follow. Given that this is a book about zombies, I wasn't expecting the incredible amount of time that I spent laughing aloud. The character of R has to be one of my favorites of all time now. I hear the eloquent thoughts in his head, but when he opens his mouth, he can't make more than two or three syllables come out at a time. Generally, they are about eating, moaning, or groans. The difference between what he's saying to me in his thoughts and what the dialogue consists of makes for some hilarious reading.

R doesn't remember his full name, just that it started with an R and he lives in an airport which is such a unique setting for a zombie community that I had to know more about it. I enjoyed seeing the zombies not really understand why they do what they are doing, but continuing with some normal things like church services, handing kids out to the adult zombies, school, and marriage ceremonies. I loved seeing R be a true zombie eating brains with his friend M, but also that he disliked having to do it. He knows that he doesn't really have a choice in the matter, but in his heart he wants to be a human and a good person. By eating brains, they see memories of the person's life like flashbacks. This was such an interesting concept and made the story very rich because of it. When he eats Perry's brains, he gets more than memories and makes a sort of connection with him. Julie, who was Perry's girlfriend turns R's world upside down, and her up-front attitude and strong personality immediately endeared her to me. She pulled R out of his shell and had him speaking more which was nice to read.

The zombies all know that they will eventually turn into another kind of zombie called a boney who are basically skeletons with no flesh left and uber creepy brain-munchers. The story has these boneys becoming the bad guys because they don't like how some of the zombies are changing and becoming more human. I'm not going to spoil the concept of the story, but I greatly enjoyed the whole idea behind Warm Bodies.

There really was nothing bad with this book. The ending was a tad confusing because Marion left some loose threads there in order to write a second book if this one was well-received, but able to stand on it's own as well. Thankfully, there will be a second one coming out so I'm glad to see some of those questions answered in the next story.

There were a couple of little romances explored in this story. My favorite part in the whole book is when R is riding the escalator and meets a girl there and the events that quickly follow. I can't give that away without being spoilery but it had me cracking up. Then there was some talk of zombies hooking up that was so funny.  I'm not sure that subject has ever been explored before and I had a blast seeing it.

I'm not sure how everyone will feel about a zombie having a relationship with a girl, but the way it was done in this book was so lovely. The build-up from distrust, to friendship, to love was very well-told and so fun to read. At the heart of Warm Bodies, it IS all about the romance found between these two unlikely characters.  R will do anything for Julie, loves her with everything he has, and Julie brings out the absolute best in R. They protect each other, sacrifice for each other, and take care of each other.

But it does make me sad that we've forgotten our names. Out of everything, this seems to me the most tragic. I miss my own and I mourn for everyone else's, because I'd like to love them, but I don't know who they are.

"City," I say, putting a hand on my stomach. "Food." The girls he's talking to look at me and shuffle away. I've noticed I make some people nervous, though I can't guess why.

"Two days...ago." I grab my stomach again. "Feel empty. Feel...dead."
He nods. "Marr...iage."
I glare at him. I shake my head and clutch my stomach harder. "Need. Go...get others."
He sighs and walks out, bumping me hard on his way past, but I'm not sure if it was intentional. He is, after all, a zombie.

"Not...eat," I groan at Julie, looking her in the eyes. "I...won't eat."
She stares at me. Her lips are tight and pale.
I point at her. I open my mouth and point at my crooked, bloodstained teeth. I shake my head. She presses herself against the window. A terrified whimper rises in her throat. This is not working.
"Safe," I tell her, letting out a sigh. "Keep...you safe."

My eyes snap open. M is glaring at me. He makes a grab for the piece of brain in my hand and I yank it away.
"No," I growl.
I suppose M is my friend, but I would rather kill him than let him taste this. The thought of his filthy fingers poking and fondling these memories makes me want to rip his chest open and squish his heart in my hands, stomp his brain till he stops existing. This is mine.
M looks at me. He sees the warning flare in my eyes, hears the rising air-raid siren. He drops his hand away. He stares at me for a moment, annoyed and confused. "Bo...gart," he mutters, and locks himself in a toilet stall.

"Con...vincing?" I ask.
"Hmm," she says. I offer her my best attempt at a winning smile, stretching my lips wide.
"Oh, God. Definitely don't do that."
"Just be natural," Nora says. "Pretend you're home at the airport surrounded by friends, if you people have those."

I did watch the movie with Melody and have to say that it is now one of my favorite movies too! She told me that this story is loosely based on Romeo and Juliet, which I didn't know before, but it makes a lot of sense. We both agreed that the casting couldn't have been better with Nickolas Hoult as R in the movie because the facial expressions were so important since he didn't talk a lot, and his were dead on. I was laughing so hard while watching this film. I watch movies as an extra chance to see characters that I love and I'm not too worried about it being 100% a match to the story. That being said, if you've read the book I think it's still worth seeing the movie because the ending was a little different and more clear in the movie plot. Also, vice versa, if you've seen the movie, it's still worth reading the book because you would get to see a lot of jokes and information about the zombies themselves and their community that were left out of the movie.
Posted by JezzebellJC at 12:00 AM