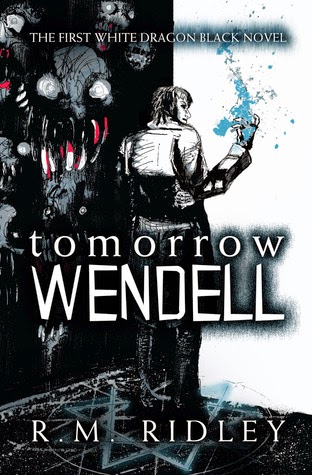 When predictions tell Wendell Courtney he’s going to die, he turns to the one man he hopes can help. Jonathan Alvey’s no stranger to the strange. But, unlike the private investigator’s run-of-the-mill zombie cases, he can find no trace of magic around Wendell, and no hint of an adversary. Alvey certainly has magic and wits enough to solve the mystery, but is his offering to the insatiable dragon black sufficient? Or is Wendell truly destined to die?

"And so, with this reassurance, I took a coin from my pocket. It cost only a nickel see, and I figured what the devil. Well, they do say you shouldn't tempt fate or the devil, don't they, Mr. Alvey?"

What interested me in Tomorrow Wendell was the private investigator mixed in with the magic story-line. The main character Jonathan Alvey is what you want in your PI. He's a bit rough around the edges with only a few friends to count on, and he drinks and smokes too much, but that's just to take off the edge that casting magic creates. I felt like I got to know him enough to understand him and why he sticks it out. Why he uses magic despite the cost and why he fights for the little guy when he's outgunned. I really liked how Ridley handled some of the magic casting and charms used in the story, the explanations he used and techniques he described. I liked that he didn't go with the usual magical creatures to fight as the book went on and went outside the box. I enjoyed the pace of the story as it didn't feel rushed, while at the same time I never felt bored and just wanted it to pick up.

My only real complaint would be the abrupt end of the story. I felt like there were more than a few questions left unanswered, but I guess we'll call that a build up for the next book.

Like any good private investigator, Jonathan does have a love interest. Their relationship felt a little cookie cutter for the situation. He has the dangerous job, but if he doesn't who will? She wants him to quit because she is afraid of what will happen to him, but he's stubborn. I like their relationship despite it being the common 'I wish you wouldn't but I have to' type deal.

Overall, Tomorrow Wendell was what I was hoping it would be. A brooding PI racking his brain while running down leads to try and save his client. When trouble shows up, he uses everything from his fists, to his gun, to magic, to varying ways to fight back for overcoming the bad guys. It's not cover to cover action so if you need that, it's not going to interest you. I recommend this to anyone looking for a change of pace magic creature wise. No vampires or werewolves here.

"Stop after this one? And what about the next client? What do I say to them, 'Sorry about the nightmares hiding behind your mind that have started eating at your soul?' Do I ignore their needs, their missing children, their possessed spouse, or cursed parent?"

"What would I do without you and your uncle, Quan?"
"I suspect, get very hungry,"  the kid said and then, looking at all the alcohol on the desk, added, "and very,very drunk."


"Do you smoke?"
"The ad said it was a smoking environment. It was clear about that," the woman pointed out.
"Yes, because I smoke, but that wasn't the question."
"Yes, I smoke."
"Good. I can bum yours if I run out."


"People start out life believing in just about everything. But as we get older, we are taught that our imaginary friends are not only not real, but frowned on - discouraged. One
by one, beliefs are stripped away. You are made fun of, or disciplined, for things that don't fit everyone's beliefs."