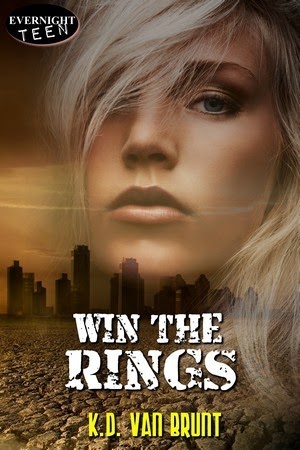 Jace has been the property of the U.S. Army since they found out about her when she was five, and now she has become one of its most valuable weapons. But Jace is not the only one of her kind. Gray is one too, but with the help of his sister, he has spent most of his sixteen years hiding from the Army. Now, the Army has found out about Gray and they cannot allow him to roam free. Operating on the theory that it takes one to catch one, Jace is send out with a special ops squad to hunt Gray down. But Jace is not the only one pursuing Gray, and the competition is after her too. What ensues is a desperate chase through city after city as duty and honor collide with love and sacrifice.

"It's simple. If things go bad, Nia over me. Promise?"


Where to start? I love the characters, so we'll start with them. The writer lets us get to know them just enough so we can like them and form opinions about them, but not get smothered in their life story. He also does a really good job of balancing enough characters to fill multiple scenes in multiple locations without drowning you in names that you just don't care about. Not once did i find myself having to back track to try and remember who someone was and how they related to the story line. Which is important to me when you have so many named faces. I thought he did an outstanding job in this aspect of the book.

I love how their power works. Not only do they take the form of who they shift into but they get thoughts and memories and can even pull items that are in their pockets through the contact into their own pockets.

I do want to touch on two characters in particular, Jace and Grey. Jace, because she just may be one of my favorite female bada**** of all time. I love how she doesn't look for trouble, and in her own way she even tries to give those who mess with her a way out. But when they push, or are too dumb to see the gesture for what it is, she goes full on. Cobra Kai and shows no mercy. Then with Grey, you have this kid whose grown up on the run with his older sister. They've survived by stealing from dishonest people. Kind of the Edward Cullen 'only eat serial killers and rapists' motto. And it works for them, but Grey still tends to make mistakes as he is only sixteen. The thing i like about Grey is he comes off as the crafty, sarcastic look-out-for-the-little-guy type even if it means he gets hurt in the process. The possibility of Jace and Grey teaming up, her the fighter and him the sneaking street-smart mouthpiece, with equal billing intrigues me to no end.

I loved the pace of the story as I was able to pick it up and read right through to the end in two sittings. Would  have been one, but work got in the way. I never found myself hoping he would just get on with it. It's not cover to cover action, but at the same time, it had the potential to have a fight break out at any given moment which I enjoyed. He did have a few surprises for me with some of the characters. One in particular he got me to like and root for where before I thought I didn't care for them at all. Yeah i didn't see that one coming. While he has the obvious good and bad guys, he did a phenomenal job mixing in the hidden mole or moles leaving you wondering who will betray who. Plus, I'm wondering what other abilities will show up since we've seen more than shape-shifting already.

My gripe is how easy Jace understood relationship issues. I get she leads the girls and had for a long time, but she didn't really like them and did distance herself from them. Most of them seem to dislike her. So with her growing up in the army's care since she was 5 years old and never having been in a relationship or seemingly having an interest in one, she handled their problems like an old pro. Small gripe and something she may have picked up from the old leader before she graduated, but it still read off to me just a bit.

Well in book one, it's more about the love than the romance. While there are a few short relationships, the only one that stands out is the brother/sister relationship of Grey and Nia. So as I said, not really romance but love does effect a good portion of the choices made in the book. I really like the way he handled it as well. The way Nia treats Grey feels so natural it's as if the writer just observed a brother and sister in this situation, but I'll assume he doesn't know anyone on the run from the law, and if he did that they didn't invite him along to observe them just for his book. Let me just end this part by saying the brother and sister bond is something I look forward to the most in the next book.

Money well spent. I would recommend this book in a heartbeat to anyone that enjoys the paranormal/fantasy genre. I'm really looking forward to the next book in this series and seeing how the characters develop. Win the Rings has become an instant favorite of mine. It's worth reading over and over again. Until part 2 is out, I'll just chill on this cliffhanger he left us on. Don't worry there's plenty of room for you to join me.

"Shifters are valuable. There are groups that would pay an arm and leg to get one."

"I try to skim, and I'm good at skipping over the bad stuff in their minds, but still I've seen too much pain and agony that people store up inside. I've seen brutality, abuse, infidelity, and more. Everyone has skeletons locked away in their closet- one skeleton in my closet is that I'm a Peeping Tom."