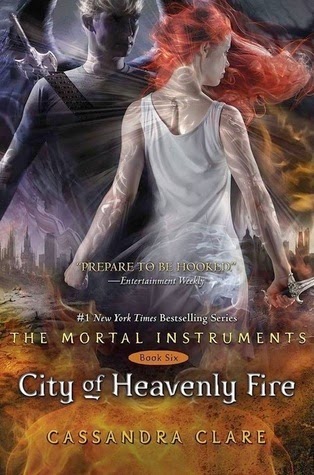 In this dazzling and long-awaited conclusion to the acclaimed Mortal Instruments series, Clary and her friends fight the greatest evil they have ever faced: Clary's own brother.

Sebastian Morgenstern is on the move, systematically turning Shadowhunter against Shadowhunter. Bearing the Infernal Cup, he transforms Shadowhunters into creatures out of nightmare, tearing apart families and lovers as the ranks of his Endarkened army swell.

The embattled Shadowhunters withdraw to Idris - but not even the famed demon towers of Alicante can keep Sebastian at bay. And with the Nephilim trapped in Idris, who will guard the world against demons?

When one of the greatest betrayals the Nephilim have ever known is revealed, Clary, Jace, Isabelle, Simon, and Alec must flee - even if their journey takes them deep into the demon realms, where no Shadowhunter has set foot before, and from which no human being has ever returned...

Love will be sacrificed and lives lost in the terrible battle for the fate of the word in the thrilling final installment of the classic urban fantasy series The Mortal Instruments!

So much magic, Clary thought, and nothing to mend a broken heart.


This is the ending to a series that I quite enjoyed.


All the characters that I've come to love through the course of the series get their time to shine in City of Heavenly Fire. All of them have a conclusion of some kind, whether it's death or a Happily Ever After. I appreciate knowing how all of them turned out. Like the 3rd installment, the main group is in a different setting for the majority of the story. All the places they visit are well-detailed and pull me in like I was there myself.

The plot kept my interest. The villain this time around is phenomenal. In the first few books, the group is up against Valentine, a Shadowhunter who is driven by ideas of grandeur. He was obsessed with ruling and ridding the world of Downworlders (vampires, werewolves, fae). Now, the group faces Sebastian, who is a Shadowhunter with demon blood. Sebastian, to me, is far more terrifying. He doesn't even have the capacity for love or empathy. He truly doesn't think like a human, even an evil one, at all and he wants to destroy the entire world.

There was a nice twist thrown in that I didn't see coming. I thought I knew what was going on. There was no way it could have played out the way that I was reading it, but I had no clue. I love being tricked.

There are a few characters that show up over and over again that were never in any of the previous books. I was getting really agitated with the story switching to their POVs because I was not invested in their outcome. I finally realized that Clare must be using these characters in her next book. I did a quick Google search, and that was confirmed.

There are some huge breakthroughs and setbacks in the relationships in this story. Jace and Clary thankfully got to spend an entire book together so that was absolutely fantastic. It was a great change to get to see their dynamics while actually in a working relationship. Simon and Isabelle, however, had some huge setbacks. I won't spoil there, but it definitely made for some interesting drama while reading. Alec and Magnus? Well, you'll have to read to find out.

So glad that I got to see how each of these characters end their time in the spotlight. Clare isn't afraid to kill someone off, and in the same paragraph give someone else an HEA. The twists and turns were fantastic, but the repetition of characters I hadn't seen before was boring. The villain is phenomenal, and the suspense was real. Recommended.

"Heroes aren't always the ones who win," she said. "They're the ones who lose, sometimes. But they keep fighting, they keep coming back. They don't give up. That's what makes them heroes."

"So what's their plan, hitting Sebastian over the head with Jace until he passes out?"

"Valentine Morgenstern nearly wiped out the Shadowhunters, and his son is twice as clever and six times as evil. And he will not come alone."

He doubled over. Something hot had lanced through him, through his shoulder down through his guts, like a spear of fire. He hit the ground on his knees, crying out.
Posted by JezzebellJC at 12:00 AM