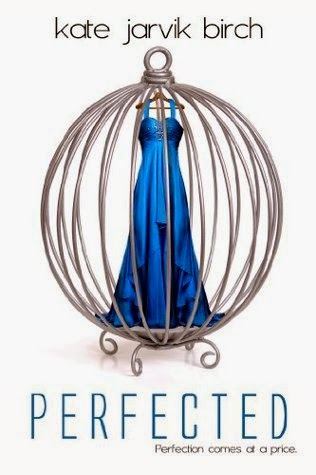 I was bred to be the perfect pet. I was bred for my beauty and grace, to be a showpiece, an ornament to sit upon the couch, to sing, to dance, to play the piano and paint. I was bred to willingly put my owner's happiness before my own.

But there's a dark underworld lurking beneath my pampered life. The only thing more dangerous than staying with Penn's family is escaping it, because if I fail, I face a fate far worse than death...

For fans of Kiera Cass's Selection series and Lauren DeStefano's Chemical Garden series, Perfected is a chilling look at what it means to be human, as well as a stunning celebration of the power of love to set us free, wrapped in a glamorous—and dangerous—bow.

"Your sole purpose is to enrich the lives of your new owners."


I'm walking into this review with the hope and assumption that there is a second book and hopefully this is a series. There is quite a bit of information in Perfected that can be expanded on and the ending left questions that I'm truly wanting answered. The blurb says that if you enjoy Selection and Chemical Garden that this one is similar. I have both of those on my to-read list, but I haven't gotten to them yet so I can't help answer that question.


I couldn't sit this book down. There wasn't a lot of action going on, but the pacing and questions I had about where this book was headed left me wanting to read every bit of it as quickly as I could. The writing is done very well, flowing smoothly, and I enjoyed being in Ella's innocent mind for the narration.

What truly sucked me in though was the philosophy involved. The world is an exact replica of my own America, and yet legislation has been passed in which people are now genetically engineered, raised to be obedient, raised to be pleasing, and sold to the highest bidder among elite citizens. These 'pets' are trained to believe that being a pet is a privilege; however, when Ella joins her new family, she soon realizes that being a pet to the world outside means little more than being a dog. For example, there are conversations about walking her and whether she needs a leash, micro-chips and chains installed, and talks of 'spaying'. IT WAS DISGUSTING. I was so revolted by how some characters legitimately thought this was fine, that I had to see if she could get the better of these ridiculous people. I was behind Ella the whole way, through the growth she experienced in finding out what makes HER happy, that I was yearning for her to overcome her circumstances.

Her family seems likable enough at the start of the story. The congressman that becomes her 'master' has helped pass the legislation which allows these rich families to own pets. He has some secrets up his sleeve. His wife is exceptionally unhappy about having a pet at all. Their two kids, Ruby and Penn have differing opinions of Ella being there as well. For Ruby, she is a friend to play with. For Penn, she is an embarrassment on the family at first. Later, he becomes more sure that she has a personality hidden under all the 'yes sirs', and he helps to bring that out of her. Life for Ella takes a turn for the worse, and the story-line picks up a lot after that. Claire is a daughter of their's that shows up later that just confused me.

The main huge mystery of the story, I had figured out pretty early on as I'm sure most of the readers will. The secret is made into a pretty big deal, mentioned over and over again, so I'm surprised that it was so easy to ascertain.

While I was rooting for Ella the whole time to make it through in one piece with her own happiness found, I couldn't help feeling icky for reading about people as pets. They have to do whatever their 'masters' say, so there is some mention of people touching her with intentions that definitely do not seem innocent. Which brings to mind all of the owners with all of these pets, making me realize that some of them certainly aren't being appropriate with these girls. I want to see them all PAY for treating people this way.

Penn helps Ella so much by introducing her to things she has never experienced. Their journey from him hating her to being so sweet and assisting was nice to read. They have some good romantic moments, all innocence and fanciful. It's a forbidden romance so it makes it more interesting.

A thought-provoking read that is well-written and flows smoothly. I turned page after page to get to the conclusion which left me with more questions although it was concluded. I am sincerely hoping there is a follow-up for this story. Recommended.

"Like corn silk," he said to the woman next to him. "Did you say you were hoping for a blonde or a redhead? This one almost seems like a mix of the two."

Growing up, we'd feared that door more than anything; more than the dark, more than scary stories whispered at night. It remained locked, but somehow we all knew that it was the door that imperfect pets were sent through.

"I can't read," I said softly.
"What?" she gasped, pounding the bed with both fists. "You can't swim or read and you've never had candy? How are you supposed to survive? Those are like the most important things."