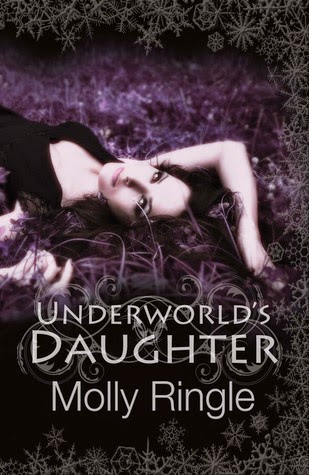 New immortals are being created for the first time in thousands of years thanks to the tree of immortality discovered by Persephone and Hades. But Sophie Darrow is not one of them. Nikolaos, the trickster, has given the last ripe immortality fruit to two others, the reincarnations of the gods Dionysos and Hekate: Tabitha and Zoe, currently Sophie's and Adrian's best friends.

While the disappointed Sophie struggles to remember Hekate and Dionysos from ancient Greece, she must still face her daily life as a mortal university freshman. Tabitha and Zoe have their own struggles as they come to terms with being newly immortal and their own haunting dreams of past lives and loves. The evil committed by Thanatos invades all of them in heartbreaking memories, and worse still, Sophie and her friends know their enemies are determined to kill again. And even the gods can't save everyone.

"Thank goodness," he said. "I wasn't quite ready to face that risk yet."


I love Persephone's Orchard so much, I couldn't pass up the opportunity to read Underworld's Daughter. Though a great read, it's not as good to me as the first in the series.


One of the greatest things about this series is the jump back to Ancient Greece in the time of the Gods/Goddesses. Ringle's spin on their past and lives is enthralling and thought-provoking. Don't go into this story thinking it's a history lesson on the old myths. While a lot of it is based on what we've come to know of Greek Gods, there are certainly a lot of things that Ringle changed up to make the story fit together for her world in a way that makes me seek to absorb all the bits and pieces of the information.

While I adored getting to know Sophie and Adrian in Persephone's Orchard, this one is largely focused on Tabitha and Zoe. Their alter egos are fascinating and unusual. Oftentimes, I yearned for the switch back to their alternate lives. These character additions definitely add so much to the story. They have a large part to play in Sophie and Adrian's lives so it was fantastic to get to know more about them.

The action is well written. You get the sense that these characters truly feel the danger they are in. While a little ironic that the 'big bad' is an old lady, she is truly a terrifying foe for this group since she is a part of the larger evil organization Thanatos. It would be intimidating to go up against what they are faced. Also, there are a great number of twists which make Underworld's Daughter so engaging.

The problem with this series where it stands now is that the Greek Gods overshadow the 'normal' characters by quite a lot. Their stories are intricately thought out and provided in a great way that doesn't hurt the narration of the book. However, the main characters are not nearly as well-rounded and often a few of them seem to do things that are out of character.

I feel like I'm really going to like Zoe and Tabitha later on, but they are both obsessed with what they know isn't going to work. It's the whole: this guy loves this girl, and she loves this other guy, but he loves another girl who will never love anyone. It's a huge mess, and I'm a fan of people in life and books learning from past mistakes. I hope they become a little less shallow in later books and make better decisions. This thread needs to be interrupted because currently they are miserable.

It's a square. A legitimate square as mentioned above. The one relationship that I love (and isn't a part of the square thankfully) is Persephone and Hades. These two have an alluring and compelling relationship. There are some steamy moments for sure because they can't keep their hands off each other.

Sophie and Adrian can't seem to get things together even though there are amazingly sweet moments, their relationship is a bit awkward. They were so great in the first book so I'm very hopeful that things will look up for them in the future.

Ringle is a fantastic writer. She can weave the story together in a way that takes these fantastic ideas and have them make sense. The story is beautiful, impressive, and engaging. While the main 'normal' characters aren't as well rounded as the outstanding Greek counterparts, I still can't wait to soak up each chapter. Recommended.

"A freezing cold underground river. A dark cave lit by ghosts. A man too stupid to realize you loved him. This is what you want?"
"All of it. Especially the very stupid man."

"I meant to tell  you about him." Hades waved toward Kerberos. "He was wounded from some bite and it got infected, but one of your new fruits seemed to put him right. He's been a barrel of energy ever since."

"She's awesome," Niko said again. "You have wonderful taste in friends, Sophia." He glanced at Adrian. "Not so much perhaps in boyfriends."
"Out," Adrian said. "Get out."

"Will that bother you? The possibility of collateral damage?"
Landon swallowed, his Adam's apple bobbing, but he kept the car traveling steadily down the highway. "Not if it's for an important cause."
"It is."
a Rafflecopter giveaway
Posted by JezzebellJC at 12:00 AM