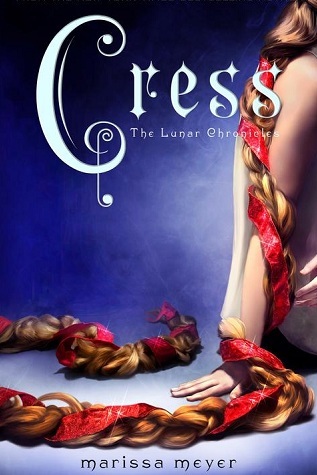 In this third book in the Lunar Chronicles, Cinder and Captain Thorne are fugitives on the run, now with Scarlet and Wolf in tow. Together, they’re plotting to overthrow Queen Levana and her army.

Their best hope lies with Cress, a girl imprisoned on a satellite since childhood who's only ever had her netscreens as company. All that screen time has made Cress an excellent hacker. Unfortunately, she’s just received orders from Levana to track down Cinder and her handsome accomplice.

When a daring rescue of Cress goes awry, the group is separated. Cress finally has her freedom, but it comes at a high price. Meanwhile, Queen Levana will let nothing prevent her marriage to Emperor Kai. Cress, Scarlet, and Cinder may not have signed up to save the world, but they may be the only hope the world has.

"You can help me pick out a tiara when we're done saving the world."


This is one of my favorite series, and it just keeps getting better and better.


So I already read the intro story to Cinder, the character that is a play on Cinderella, and Scarlet, the character that is a play on Red Riding Hood. This one centers around the intro story to Cress, a character based on Rapunzel. When I met her, she blew me out of the water. She couldn't be any more different than the two hard-core heroines I've already met in this series. She is a damsel in distress, and she knows it. She is so naive and innocent, and she has all these fantasies about what life will be like outside of her prison. It was a lot of fun watching her come into her own, to discover her intelligence and adaptability. She also handles being let down so well.

I love the alternating POVs. Due to all the events that unfold, it was important to follow all the characters around. Unfortunately, there were circumstances that caused them to be torn apart, and thrown together, and then ripped apart. It had my heart racing to find out whether everything would work out between all these characters so they could continue the story as one unit. There are so many turns in this one, and a lot of revelations that I didn't see coming.

I think this story is headed to an amazing conclusion. Based on how everything goes in this book, I'm up for quite the adventure in the grand finale. I got a little glimpse at Winter who is to be the character basis for the next book. She is a bit loony, sweet, and unpredictable. I'm looking forward to learning more about her.

Nothing. I felt like this book went exactly as it should have.

Each of these main characters has their own romantic interest in the story. Scarlet has Wolf, Cinder has Kai, and Cress has a crush as well. The romance is handled so well in The Lunar Chronicles. Everything is slow, the build-up that I love, and sprinkled with just enough moments to be very enjoyable. I also truly feel that each of these pairings fit together so well. There's no triangles here.

A story unlike any other. The combination of old-school fairy tales with a dash of paranormal and sprinkled with science fiction, the roller-coaster that Cress took me on was without a doubt one that I enjoyed. Recommended to YA Paranormal/Science Fiction lovers.

"I have a suggestion," said Iko, replacing the news story of the Lunar operatives with an ongoing report for the upcoming wedding. "If we're going to be sneaking into New Beijing Palace while Levana is there, why don't we just assassinate her?"

Kai bit the inside of his cheek, These were the same arguments he'd been repeating to himself. He was doing the right thing. He was saving lives. He was protecting his people.

Cress was buoyed by giddiness. It was happening. There were really coming to rescue her.

"Since we have a few minutes," said Scarlet, "maybe we should talk about how to handle this girl. If she's been stuck on a satellite for seven years, with no one to talk to but a Lunar thaumaturge, she might be...socially awkward.
Posted by JezzebellJC at 9:51 PM