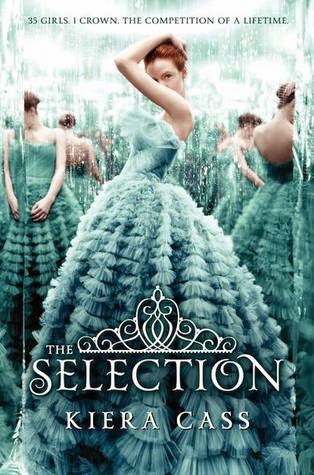 For thirty-five girls, the Selection is the chance of a lifetime. The opportunity to escape the life laid out for them since birth. To be swept up in a world of glittering gowns and priceless jewels. To live in a palace and compete for the heart of gorgeous Prince Maxon.

But for America Singer, being Selected is a nightmare. It means turning her back on her secret love with Aspen, who is a caste below her. Leaving her home to enter a fierce competition for a crown she doesn't want. Living in a palace that is constantly threatened by violent rebel attacks.

Then America meets Prince Maxon. Gradually, she starts to question all the plans she's made for herself—and realizes that the life she's always dreamed of may not compare to a future she never imagined.

"Yeah, Mom, I'll just keep telling the prince that he has absolutely no shot with me and offend him as often as I can. Great plan."


For me, it was a very quick read and one I enjoyed a lot.


For whatever reason, this book was the right one for the moment. I read it so quickly and enjoyed every minute of it. What was so great about this book for me is how unexpected the main character, America, is. I thought it was fantastic that she didn't really want to be a part of the Selection.

To me, it's a mixture of Cinderella and The Bachelor. Take that as you will. The world is broken out into castes based on who your ancestor was when the castes were created. The 8's are basically destitute. The 1's have the money and power. America is in the middle. When a letter is sent to girls within a certain age-group that Prince Maxon is holding a Selection in order to choose a bride, America really wants no part of it.

She is stubborn, intense, caring, and speaks her mind. I love her. I also like the girl that she befriends, though you can tell there is a secret hiding there. I hope we find out what it is in the second one. Maxon is such a great character to me as well. America was expecting a stuck-up, stiff-necked tool, but what she got was someone who truly cares about others and wants to understand the world around him.

The characters really drove this story for me. In addition, the rebels were an odd twist that I found I liked. She's in this palace with more luxuries than she can image around her, too bad she was to fear for her life in the form of rebel attacks.

I really don't understand the driving force for America to compete in the Selection. It didn't make sense to me. Also, I was not a fan of the conflict that was Aspen, though it did cause America to be a better character overall due to his presence. My main gripe is that Maxon is so wonderful, and Aspen I didn't really care for. This love triangle is not one for me.

Well, America has a boyfriend. Or, rather, had a boyfriend. His name is Aspen and he's the dreaded love triangle. I say that because I don't understand his actions, and he gets on my nerves a little. The song "Single Ladies" by Beyonce plays through my head while reading. "If you like it, then you should've put a ring on it." Maxon forms a relationship with America that is so sweet and not overly romantic, but I can't help but love him.

The story flew by while I was reading. Such a quick, light, and fun read. I am really looking forward to the next one in this series.

The idea of being entered into a contest for the whole country to watch as this stuck-up little wimp picked the most gorgeous and shallow one of the bunch to be the silent, pretty face that stood beside him on TV...it was enough to make me scream...

"Honestly, I don't know. I think that's the beauty of the Selection. No two women who enter will be exactly the same - not in looks or preferences or disposition. And through the process of meeting them and talking to them, I'm hoping to discover what I want, to find it along the way." Maxon smiled.

"Enjoy your last night as an average girl. Tomorrow, no matter what, your life will be different forever. And it's old advice, but it's good: Be yourself."

"Actually, that was unfair. They're fighting over two things. Some fight for you, others fight for the crown. And they all think they've already figured out what to say and do so your choice will be obvious."
Posted by JezzebellJC at 12:00 AM