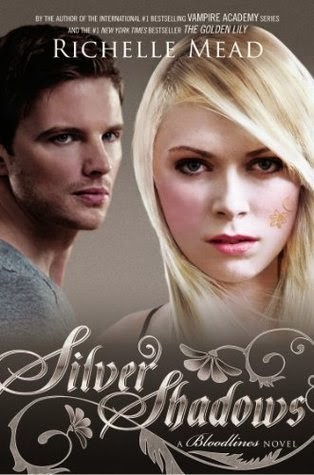 In The Fiery Heart, Sydney risked everything to follow her gut, walking a dangerous line to keep her feelings hidden from the Alchemists.

Now in the aftermath of an event that ripped their world apart, Sydney and Adrian struggle to pick up the pieces and find their way back to each other. But first, they have to survive.

For Sydney, trapped and surrounded by adversaries, life becomes a daily struggle to hold on to her identity and the memories of those she loves. Meanwhile, Adrian clings to hope in the face of those who tell him Sydney is a lost cause, but the battle proves daunting as old demons and new temptations begin to seize hold of him. . . .

Their worst fears now a chilling reality, Sydney and Adrian face their darkest hour in this heart-pounding fifth installment in the New York Times bestselling Bloodlines series, where all bets are off.


Silver Shadows had all the makings of a final installment, and we haven't even reached that point yet.
Other than the end that is, since it's setting up another huge plot line.

The whole feeling of this one is different since the setting is off and the characters are torn apart all facing their own issues. Those issues are HUGE. Terrible struggles are placed on my favorite characters to find their way through. I was growling at my kindle. I turned my kindle off in disgust only to turn it back on 45 seconds later because I HAD TO KNOW WHAT HAPPENED NEXT. I am so emotionally invested in these characters that I was yelling at them really hoping they'd heed my advice. I winced in pain at some of the dumb decisions that came out of it and cheered when everything went right.

The crazy part is that the middle section is a little on the slow side. What happens though is I'm telling myself, "Something big has to happen in the next chapter." Things just keep building and building slowly into the WAM! about 3/4 of the way through that caused me to not put my kindle down and read on through until finished.

Other than that not being as surprised as I normally am with Mead's work, things were fantastic. Except, maybe making me emotional which I don't tend to like. I was more emotional on the angry side though not sad so it's all good.

OK Sydrian...swoon. These two together are strong, fierce characters that can take on anything. They make each other better people which is how a great relationship should really work.

Apart, they are a mess. Sydney is constantly jumping into crazy situations that while she is incredibly smart, are very poor choices. She's got that whole saving others thing even at the detriment to herself. Adrian has no real reason to do anything other than party and make ridiculous decisions when Sydney's not around or when he's not trying to keep her happy.

If you haven't started this series, you really should be reading it. There's a good twist in this one, great plot, fantastic characters, charming romance, unique powers, and more.


“But with Sydney... with Sydney, I'd had it all- And lost it all. Love, understanding, respect. The sense that we'd both become better people because of each other and could take on anything so long as we were together. Only we weren't together anymore. They'd ripped us apart, and I didn't know what was going to happen now.”

“What is it with you and girls, Adrian, dear? Why do they either mean nothing to you or everything? It's always an extreme."
"Because I don't do things in halves, mom. Especially when it comes to love.”

“Out of old habit, I put my hand on my collarbone, touching a cross that was no longer there.
Don't let them change me, I prayed silently.Let me keep my mind. Let me endure whatever there is to come.”

“I know what love is, Mom. I’ve had love that burns in every fiber of my being, that drives me to be a better person and empowers me through each moment of the day. If you’d ever had something like that, you’d hold on to it with every bit of strength you had.”

“Sanity’s overated, my darling.”
Posted by JezzebellJC at 12:00 AM