Review: The Only City Left by Andy Goldman 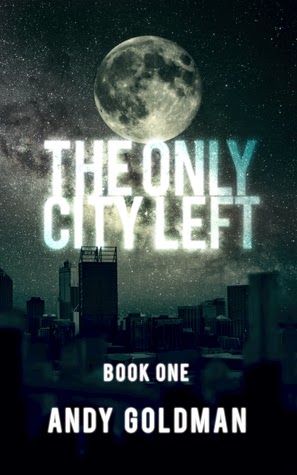 Eighteen-year-old Allin Arcady only wants one thing: to reach the Roof of the World and see the Sun for the first time in his life. The problem is, he's lost in the depths of the ruined planet-city called Earth, fleeing the horrors of his past.

When his past catches up to him, Allin is thrust into a science fantasy adventure in which he meets a race of genetically-modified cats, tangles with vengeful werewolves, and parlays with cyborgs. Along the way, Allin is forced to decide: will he spend his whole life running or take a stand against the forces that want to finish off the Earth once and for all?

Dad of course, hadn't liked the fact I was afraid of ghosts. First chance he got, when I was maybe eight or nine years old, he found one and forced me to approach it. "Say 'Hello' to it, Allin," he had said.

There are so many good things about this book for me. To be honest, when I got a few chapters in, it was like I was bitten by a zombie. There was no cure to stop it, the turn, I was now a fan. All I wanted at that point was to reach the roof of the world and it the sun as well. The book has some great fights as well as some fun races. I love the walking, talking cat people. Well most of them. The werewolves as bad guys work very well and I did enjoy how they were able to access the moonlight despite being underground in a hive-like city. There is plenty of other danger to avoid from other monsters to traps set by hungry people looking to lighten your load so you can travel easier. The Future underground city was descriptive and creepy.

Honestly my only complaint is I want a book 2 in my hands already.

The Romance in The Only City Left is between Allin and a young women named Tyena. The two of them have some complicated history but you can't help but root for them.

This is such a good book. I'm pretty sure there will be a book 2, and I'm dying for it. If there isn't a plan for one right now, I hope that changes. This book has a little bit of everything I need in a book. A good concept, good character development, strong protagonist and quirky sidekicks. Plus, it has a few bonuses, in particular an amazing environment in which the story takes place. I totally recommend this book to anyone that enjoys these things. If you’re on a cold streak, I really recommend The Only City Left as a bad book streak breaker. Trust me on this one.


Furry and child-sized. This was my rescuer?

"I knew exactly where to find you, Allin" Doyle yelled. "I did it once. I can do it again. Are you willing to live in fear until then?"

"How far to Pudlington?"
"Not very. The trick is to figure out where we are first."
"You're lost?"
"No, I just don't know where I am yet," Tumble said.
I failed to see the distinction.

A group of school-kittens led by an exasperated teacher jeered and waved at us, making kissing noises when they saw us holding hands.

Blondie's eyes bulged when he looked behind us and saw no safety in that direction. He skidded to a stop and asked, "Did you wake the dead? Idiots!"


"What's the fifth house?" I asked.
"Gods. Or as close to them as the Earth can afford nowadays."
"You met some gods. Right." So much for the truth.
He scowled at my sarcasm."I have a werewolf army and I came back from the dead, and you find it hard to believe I met some gods?"
Posted by JezzebellJC at 12:00 AM