Review: Shadow of the Last Men by J.M. Salyards 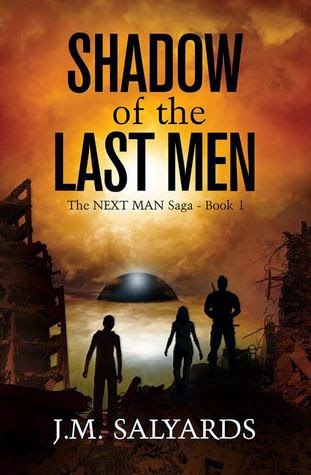 In the bleak Outlands, in the shadow of the Third City, one harrowed soul emerges to deliver his people from their technocratic overlords, the Last Men. The guided missile of a man will go to any lengths to exact his vengeance, and clings to his humanity by fraying threads.

As Harrow prepares to die wreaking havoc for his cause, he discovers allies who change the course of his life—Quintain, a teenage master of the metaphysical on his own quest for justice, and Alouine Morningstar, an outlawed, genetically perfected princess of the Last Men. As wills and fists collide, the unwilling hero must choose between a future beyond his victory, or death as his only chance for peace.

"In times of great crisis and peril, heroes may rise to bring balance to the world," She had told him."Sometimes it is a lone and anonymous hero, a single man or woman, dedicated to overthrowing a corrupt organization. Other times, more driven heroes are needed, and sometimes there is a demand for the most powerful of us to rise."

I had a good time with this book. The action was somewhat frequent but it didn't overwhelm the book. Salyards did a great job developing the 3 main characters and at the same time bringing them together as a group you could cheer for. He also did a good job evolving the main antagonist into someone you just wanted to see go down in a painful way. You just wanted to reach into the book and throat punch the guy at times. I did enjoy the Mysticism aspect of the book and some of the paranormal fights that occur because of it. The spiritual avatar fights were interesting and different and made for a nice change.

My only real issue would be how easy it is for the outlanders in the book to pick up a book and become adept with computers. A good deal of them are becoming almost feral from lack of an education and none of the towns mention schooling, but I decided that this meant she was a natural/genius with such technology and reminded myself that it helped the story line. If you can do that, it probably won't bother you much if at all.

There is a slow romance between Harrow and Alouine that starts off with conflict and then slowly grows into something special. They have that 'I won't admit I'm into you cause I'm not sure you're on our side' attraction that they think they hide well but at the same time people are thinking 'why don't you two get a room and get it over with already?'.

I would definitely recommend this book to other readers. It has plenty of action and character development and the story line is interesting enough to keep you reading. Plus, you will want to see if the Carver Delano (the bad guy) gets his well earned pine box or if he sticks you with a cliff hanger.

"This is the sacred power of 'no'. To live, you must learn to say no to death."

"Only the dead have seen the end of war. Is that it?"
Harrow's ice-blue eyes flashed. "Until the last of the Order is strangled with the guts of the last lictor, yes."

"Take the men who are the most crack shots with you. From there you'll have complete defilade and a clear line of fire into the street."
"What's defilade?" the chief asked flatly.
"Cover. You'll be able to hit them without being exposed to return fire."
"Why didn't you just say that?" Crate hissed.