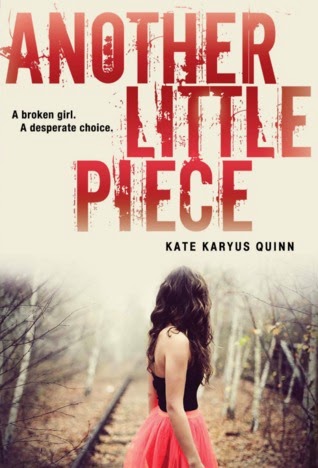 On a cool autumn night, Annaliese Rose Gordon stumbled out of the woods and into a high school party. She was screaming. Drenched in blood. Then she vanished.

Now Annaliese is haunted by strange visions and broken memories. Memories of a reckless, desperate wish . . . a bloody razor . . . and the faces of other girls who disappeared. Piece by piece, Annaliese's fractured memories come together to reveal a violent, endless cycle that she will never escape—unless she can unlock the twisted secrets of her past.

“To them, I went missing for a year. For myself, I might be gone forever. And without myself, how could there be an I?"


This book follows a young girl named Annaliese. She has been missing for about a year. She finds herself wandering down a road without memory of who she is, where she is going, where she has been, or how she got there. As a memory here and there starts to come back, there may be something more sinister than anyone could ever imagine.

"Confession is good for the soul they say. I'd imagine this is true, but my sins were too convoluted and from the little I understand, too damning."

CONFUSING CAN BE GOOD RIGHT?

This book intrigued me from page 1. I was very confused, but in a good way. It was hard to put down. The reader gets to try to figure out the mystery of where Annaliese has been and what happened to her. She is an entertaining and at times a little comical lead character. I loved the sinister twists.

I can't reveal too much. Part of the charm of this book is figuring out stuff with the main character. I also loved the supporting characters and they are all well written. I love reading a book that I really had no clue where it was heading!

ALL THAT BANG THEN A FIZZLE

Now for the bad side of intrigue. While it is a page turner, the first few chapters I found myself re-reading stuff because it's confusing. Not necessarily a bad thing but it was in how it was written. It jumped all over the place. Once you get used to the writing style, it is no longer an issue. My only other real complaint was the ending. It wasn't bad or horrible...just felt rushed. The rest of the book amazed me so I guess I expected more.

I loved this book. It was different and each page brought something new to the story. I had a hard time putting it down. The ending is slightly disappointing (not bad just wanted more), but overall I highly recommend this book to anyone who loves mystery and intrigue. There is a sinister side so horror fans will like Another Little Piece.

"I realized that while they were strange being so open about their messy lives, they were not a girl with bare feet and a funny scar, wrapped in a garbage bag who followed a feeling to their door. I was beyond strange."
Posted by JezzebellJC at 12:00 AM