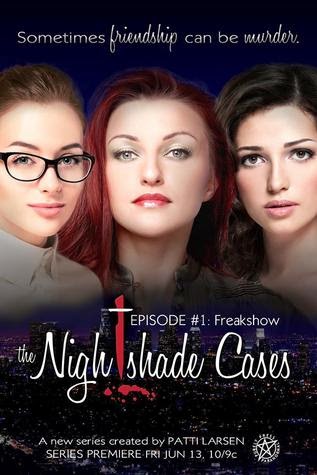 When transsexual starlet Aisling is murdered, Detective Geraldine Meyers is assigned the case. With help from medical examiner Dr. Rachel Hunter, Gerri realizes this is no ordinary killing. While she might not want to call in over-eager anthropologist Dr. Kinsey DanAllart, the detective is forced to trust her friend’s expertise in symbology, even though doing so means admitting “weird” things might be happening in Silver City. As the three friends unravel the mystery of the dancer’s death, one thing is made absolutely apparent—something isn’t right in their new hometown. And someone is doing everything they can to make sure the truth doesn’t come out.


In Silver City, sometimes friendship can be murder.


Welcome to the first Nightshade Case, a series of twenty-one episodes in twenty-one weeks. Please note: this episodic series is based on the television show model, with screenwriting notations and shorter formats. There will be a complete mystery each week, with cliffhangers only occurring in the full season story line.

"Sometimes friendship can be murder"

This book is my first paranormal thriller read and I must say that it was a great first experience. Freak Show is about three friends dealing with their personal and professional life and at the same time also dealing with their "weird" gifts. Gerri is in denial of the paranormal involvement but due to circumstances, Rachel and Kinsey think otherwise. One by one weird stuff happens, forcing the trio to investigate the case from their POV.

The three main characters have strong and well-established personalities and connect with the reader without much difficulty. It's a quick read and ends on a great note. A very unexpected character plays a very important role and that is where I realized that this book is far better than a lot of best-seller books.

What makes The Night Shade Cases more interesting for me, is that they are released weekly in episodes, which gives the reader enough time to think but not enough time to allow the story to start slipping from the mind.

The end was absolutely brilliant and will make you want to get the next book in the series right away.

(PS- I can't describe this book better than this without the spoilers!)

The only thing that made me uncomfortable (only to some extent) was the POV of Rachel, who is a lesbian and some other transgender. At one point, Rachel thinking about Gerri was just awful. Though nothing's wrong with the writing and the story, it's just out of my comfort zone.

Also they could have done a better job with the cover!

There was no romantic or love relation in particular, just a loving bond of three friends, who'll do anything for each other, though at times I highly doubted that also! Don't you think?

Freak Show has its ups and downs but what really stood out for me was the mystery involved and the thrill I felt during the entire investigation. A few negatives can be overlooked considering the fact that it's the first book, and establishment of characters and their backgrounds (the basics) was quite important. What earned a 4 1/2 rating for this book? The answer would be the pace of the story, twists, turns and surprises and a cliff-hanger ending.

If you like thriller, this book (or I should say this series) is for you. Considering the time required for reading Freak Show, anyone can give it a try and decide for themselves whether or not to get involved in the series.