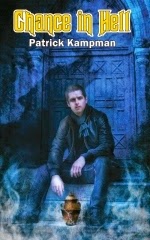 Chance is a Texan vampire hunter until a botched raid kills his team and sends him running for his life. Looking for a place to lie low, Chance takes what looks like an easy job in California. Dispose of a mysterious object. No vampires involved. But Chance's life is never that simple.

Within hours of reaching the West coast, his contact is murdered and Chance is left holding the key to a demonic weapon of mass destruction. To make matters worse, the weapon was stolen from the ruthless head of a multi-national corporation who will do anything to get it back.

With supernatural hit men on his heels, Chance has no choice but to turn to the creatures he once hunted. Soon he's neck deep in otherworldly seductresses, rival werewolf gangs, ravenous witches, and dysfunctional vampires. His only hope is to gain their trust, and their help, before all Hell breaks loose.

I was dead. Resigned to my fate, I stared down at my beer, wondering if I should drink it down or swing it around, using the mug as a weapon. When I felt a tapping on my shoulder coupled with a friendly "heya!" I jumped, despite knowing very well what was back there.

The characters for the most part are fun. Chance does well as the hero with an annoying brother. I didn't like the Bry and kept hoping he would go away. Now Little Lacey, the witch that can out-eat everyone put together livens up a lot of the story. She has plenty of sarcasm and no idea of the word 'tact'. Meagan, the vampire, rocking her expensive cocktail dresses no matter the situation has a thing for Chance. Which blows his mind because he's only ever met feral vamps, so a vamp that can act normal and not try and eat his face but kiss doesn't really fit in his world. She's hot though, so maybe he can give it a try. If Toni the werewolf doesn't claim him first.

I love that they have a vampire coven with two different werewolf packs, a witch coven, and a troll in the dungeon haha. Well, ok, a troll running around town trying to catch Chance and retrieve the item he has.

A few things held back this novel for me. One, Bryan and his constant 'let's have a threesome' jokes and yet one of them seems to be slowly falling for him. I mean he does pull a pretty good prank to earn him some points but for the most part, he just comes off as an immature punk who I don't see getting anywhere unless he's talking to a younger girl. The bigger issue for me was the bad guy. Mr. Powers didn't seem that bad or scary. Sure, he sent out some henchmen and a voodoo/shaman, and  who could forget his troll, Eric, but I felt like they were the bad guys in the book and he was just a voice on the end of the telephone that made a single appearance which meant nothing. I had no feelings invested toward Powers as a bad guy.

Plenty of romance flying about in this book. You got Chance with a werewolf wanting him on one side and a vampire on the other. I'm kinda rooting for the vampire as I think they read better together. Plenty of obstacles though, you got his brother there hitting on anything female and looking to be in their 20's or younger. Though there seems to be tension with him and Lacey. She would have to put up with a lot because he is one immature dude. Of course, vampire Megan's ex and the vampire he cheated on her with just happen to live in town as well. Good times.

I wanted to rank it higher, yet I wanted to rank it lower at the same time. I really need a bad guy to hate, but it has plenty of action and car/bike chases. If you like a little bit of everything (vamps, werewolves, trolls, witches, demons, bikers, etc.), then I recommend giving this series a shot. I got lucky and book 2 was out so I started it already in hopes of finding a bad guy to hate. Wish me luck.


"Okay, so if you guys live in nests, what are groups of you called? Like flocks or swarms or something?"
"Oooh, I like pods, or maybe gaggles. Oh my god, it's a gaggle of vampires, run!"


"Pentacles? He had five? And he trapped demons with them?" I crossed my legs.
She just glared at me. "Pentacles." She said it loud and slow,like she was trying to get someone to understand a foreign language."Not testicles.A pentacle is a symbol. It looks like a star.It's what's engraved on the sides, bottom, and lid of the urn."


"So why are you doing it?" I asked, still a little skeptical of my luck. "come to think of it, why is everyone helping me? I mean, this guy is a badass rich mother. He's got trolls, witches, shamans. He shoots lightning bolts out of his ass, for christ's sake."
"Because Jonathan Powers is a dick, and no one likes a dick." Rodriguez smiled.


"As the saying goes: never argue with an idiot. They'll drag you down to their level and beat you with experience."