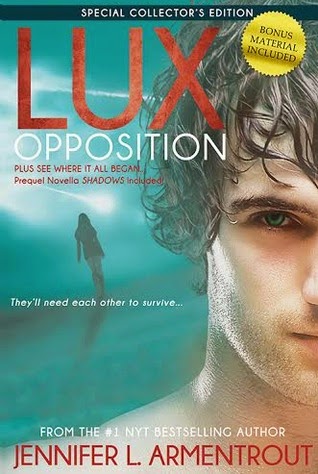 Katy knows the world changed the night the Luxen came.

She can't believe Daemon welcomed his race or stood by as his kind threatened to obliterate every last human and hybrid on Earth. But the lines between good and bad have blurred, and love has become an emotion that could destroy her—could destroy them all.

Daemon will do anything to save those he loves, even if it means betrayal.

They must team with an unlikely enemy if there is any chance of surviving the invasion. But when it quickly becomes impossible to tell friend from foe, and the world is crumbling around them, they may lose everything— even what they cherish most—to ensure the survival of their friends…and mankind.

War has come to Earth. And no matter the outcome, the future will never be the same for those left standing.

This is that sad time when a series you love is coming to an end. I rush through it because I have to know how everything is wrapped up, and then I'm disappointed because I don't have anything left to enjoy with these characters that I love so much.

The good news here is, if you have read and finished Opposition, Armentrout posted an extra little thank you to fans to read here. Please only read it if you have completed the series though as there will be major spoilers.

In the beginning of the series, I was astonished at how I was reading a book about aliens that didn't seem at all about aliens. Have you ever tried to describe this series to someone that hasn't read it? They give you that look that says 'are you crazy?' However, I fell in love with the quirky, fiery book blogger and the sarcastic bad-boy next door. Throughout the series, the alien plot line has been brought out in bits and pieces so as not to be sprung on me all at once. Then, before you know it, there is Opposition, full of all-things alien, and I adored it.

Dual POV is something that I cherish when done correctly, and it was used to great effect here. Everything has been flipped on it's head and the characters have to make due in a bad situation any way that they can. They are hit with blow after blow, and just keep on kicking. Armentrout is not afraid to kill off characters (which I think is fantastic!!), so the ones left are generally grieving while having to get back up and kick some serious tail. With all that, the hilarious dialogue I've come to love in this series, is still alive and well.

While it's always a bit depressing to see a favorite series end, the action was there in the writing, and I could truly tell that the characters were battling for their lives. The wrap-up was very well done and I can say with certainty that I enjoyed every part of this series.

While so many fantastic and detailed fight scenes are in Opposition, all through-out the story, there is one in particular that I felt could use a little more umph! You will see what I mean when you read it.

Daemon being a huge prick in the beginning of the series, and the slow-burn romance that these two went through, made for a very interesting romance in the midst of The Lux Series. In Opposition, my heartstrings were pulled from every angle with what these characters went through. Kat is a stick of dynamite, and Daemon is explosive as well. Mix in some jealousy tendencies from the two, and Opposition is a bomb that's been waiting to go off.

A great ending to an amazing series. A truly fantastic read from start to finish. I enjoyed all the added drama, action, and wrap-up. No cliff-hanger here, folks. Most definitely recommended.


“You're broadcasting your thoughts so damn loudly I feel like I need to go sit in the corner and start rocking, whispering Daemon's name over and over again."

“I think lots of things are brilliant ideas. Like nuclear weapons, zero-calorie soft drinks, and blue jean vests," he replied. "That doesn't mean we should nuke people, or that diet drinks taste good, or that you should run out to a local Walmart and buy a jean vest. You people shouldn't always listen to me.”

“She tipped her head back and started laughing, and I started picturing people twerking - everyone in the limo. Quiet Luxen dude. Rolland. Sadi. All of them bent over, butts in the air, looking like damn fools.”

“Every part of my body ached. Things went from oh crap to FML in a matter of seconds. We were seriously screwed every which way from Sunday.”

“The entire city had gone dark.”

Lotho glanced over his shoulder at me. "Look at you and your big, bad self. Rawr."
Posted by JezzebellJC at 12:00 AM