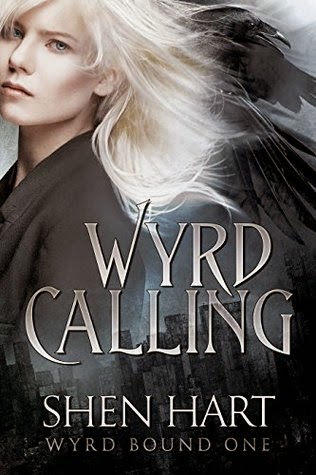 A serial killer is on the loose, and they’re targeting sirens. Thalia must pull together her new pack of unruly cubs while dealing with her ex, and try to stop the murderer. The problem is, she’d much rather return the cubs to whichever ditch the Sisters dragged them out of, and help the murderer kill the sirens.

Thalia is a hot-headed, stubborn, wild-child shifter who happens to be Wyrd Bound. She’s been away from the clutches of the Wyrd Sisters (that’s the Norse fates to you and me) for some time, where she was enjoying tricking black market traders out of their money. She knew her vacation had to come to an end at some point, but she kept telling herself she had another decade or two. Unfortunately for her, she was quite literally made for her role. She belongs to the Sisters, and they had work for her to do.


She’d tell you she wasn’t made for this “saving the day” stuff, but she’d be wrong.

Buy Wyrd Calling by Shen Hart for $.99 Today at Amazon

His lips parted into a smirk as he looked me up and down. "Now then, be a good girl and I'll get a good price for you..."

I smiled sweetly at him. "I don't think so."


So I really like this book. It's just full of paranormal creatures. I love that while following a shifter group, it's not just your normal pack of werewolves and instead most of the shifters in Thalia's new pack are more than a one-trick-shifting-pony. I really like that they use elemental magic as well. The story has a great who-done-it, find-the-villain mystery going on also.


My only complaint is you never really get to know anything about the killer, which is fine and all. But you know me, I like to invest in the villains and have a reason to root against them. That was somewhat missing for me.


Well Thailia, our heroine, has to work with her soul mate who just didn't cut it and they are now forced to be alphas for the pack. So there is lots of romantic tension.


I can't wait for the next book. I love a book that is just full of supernatural creatures and Wyrd Callling has it all. The creatures, hanging out in their environment and even having them throw down. This is one of the best books I've read this year.

I tried not to smile at the drastic shift in his attitude and demeanour. He had gone from ready to kill Dan to very animated and happy to help in the blink of an eye. I loved fae.


Ark had found it hilarious when I'd eaten the piece of elf cake that made me feel like I was hovering. It was a peculiar sensation, as though I was floating a few inches above the floor. Ark had had tears streaming down his cheeks as he laughed at me and the confusion I experienced, before the glee.


"Thalia, we're soulmates. We have a rocky past, but the bond remains in place. I'm not going to harm you, I'm your alpha. Please, stop treating me like an enemy who may slit your throat in the night."
I closed my eyes and pinched my nose, fighting back the tears that threatened to spill down my cheeks. I wanted to curl up in his arms and have everything be ok again, but I couldn't forgive him. I took a deep breath and swiped away the stubborn tears before facing him. "I can't forgive you. I can't."

Buy Wyrd Calling by Shen Hart for $.99 Today at Amazon