Review: Heroes and Villains (Out of Time #2) by Donna Marie Oldfield 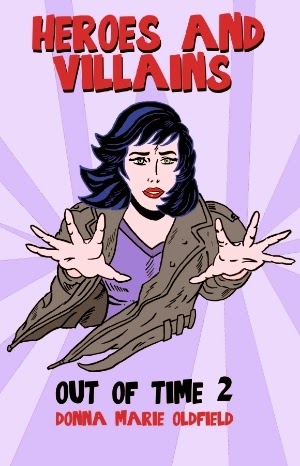 Teenage superhero Scarlett Shortt is stuck in an alternate timeline that's growing more dystopian by the minute, and now it looks like her days could be numbered.

Three months have passed since Out of Time #1 and Scarlett, Dylan and their friends are living life on the run after being forced out of their cosy London house.

They flee to Scarlett's home city of Manchester, which has been run into the ground under evil Prime Minister Goulden's regime. Much of the area has been destroyed and things are set to get even worse thanks to the PM's plans for cruel weapons, segregation and war.

As if things aren't bleak enough, their new friend, Mason, has a premonition that Scarlett will be killed and millions will die in a separate attack. Then there's the added complication of a deadly new foe, The Echidna, and a team of supervillains that features some very familiar faces.

Can the young superheroes stop millions of innocent people from dying? How will Scarlett deal with predictions of her death and will moralistic leader Dylan toughen up and accept that the rules have changed in this harsh new world?

"Is it just me," Scarlett said, "or do those uniforms look remarkably like the ones Goulden made us wear three years ago when he first captured us?"

"Super Soldiers," Dylan said in disbelief as they reached the bottom and raced over to the crowd."Of course."

"Look," she said."And unless I'm mistaken, the strong guy over there is Harvey, who attacked us a few months ago, and that is our old friend, Ethan."She pointed at a blonde teenager with a floppy fringe, who was producing small, spherical bombs.


Well for starters, I love the superheroes in the story. I love that I believe their personalities and their different quirks. Their powers are still really fun in book two and I love that as they learn to use them they come up with more ways to put them to use. Goulden makes for a great money hungry villain in a position of power. He's willing to kill any one, any where to get his way. Plus, the introduction of a new wild card in the Echidna (who happens to be the boss of a large group of thugs). This guy can take on the superheros so it's clear he has powers of his own.


My only real complaint is Scarlett and the others are supposed to be famous criminals wanted by the government. Yet they keep sneaking into different high security areas without any type of disguise. I mean, when Neelam is with them and using her powers to disguise them, it's perfectly fine but they are able to do this without her being around as well. I'd like to see them try to disguise themselves a bit when not having Neelam's mental powers to do so.

Scarlett and Dylan are still together but can he be an effective leader if he's constantly worring she will get hurt? Or will they need a new leader.


I really liked the first book and this one has built upon that foundation. I'm looking forward to book 3 to see where they go from here. It's definitely one of the better super hero series out right now. If you like dystopian settings and love super heroes like I do, then you should give this series a read.

"We could take them," Scarlett said defiantly.
Rachel shook her head and continued walking. "Trust me, you couldn't. The M-boyz work for a bigger city-wide gang that's run by the Echidna. He's Manchester's top crime boss and if you mess with
any of the kids in his circle, he'll hunt you down and take his revenge. He's not the kind of person you want to cross."

He's mad! And now I'm teaming up with a bunch of super powered teenagers to stop him." He stared around in disbelief as he tried to take it all in."This is like a weird dream."
"Know that feeling," Scarlett said. "But if you're going to have anyone on your side, are superheroes so bad?"

Scarlett glanced at the message Dylan had left on the table.
"Do the right thing. Stop the war or lose everything."