*note, it's classified as the 2nd book in the series but reads as a prequel to #1 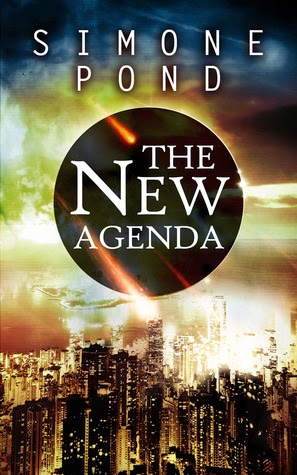 For certain, society was disintegrating: humans were self-destructive and wildly uncontrolled. But young William Morray had hoped, as an idealistic teenager, that his father’s acclaimed Repatterning Program––a precursor to the brilliant New Agenda––could manage the upheaval and get society back on track.

They said it was for the greater good: out of chaos comes order and from the ashes the phoenix will rise. They said the Repatterning was a positive event, but like most advertising, it was a lie.

William’s wish had always been to work with his father and win his approval. However, when he is sent away to a remote underground safety shelter in Denver, William is awakened to the grisly truth that the Repatterning is a mass genocide. And worse: his father, the New Agenda leader, is the spearhead of this horrifying plan to eradicate all cities, homes and people outside of the Elite citizenship. William decides to team up with an underground rebel alliance to end the Repatterning and save what’s left of civilization.

"It's not too late to get someone else to do this," Joseph says.

"I told you, I know Morray better than anyone. I've seen into the depths of that man's evil mind. If anyone's going into find him, it's me. I owe it to my people."

"You've done more than your fair share, Ava. You freed them."

"And that's exactly why I want to make sure I find Morray, so they can stay free."


So after reading the first book in the series, I really enjoyed the chance to see how the world ended up like it was. One person in control of a city sealed off from the rest of the world. I am one who really needs a good villain to draw me into a story and getting to see what created Morray made the first book that much better for me. The concept worked really well in a tin foil hat type way.


I have no major complaints, there was a few times I thought the pace was a bit too slow.


I really like the fact that Pond used an entire book to let you get to know Morray, and what made him the villain he is. Normally you might get a few chapters and have to fall in hate with the villain based off that. If you enjoyed the first book, you'll enjoy seeing the world developed and become such a messed up Dystopia.

"Your father and his elites have one sole purpose -- to kill off ninety percent of the population. We're nothin' but garbage to these assholes."


"Most places have been burned to the ground -- big cities, towns, farms. Almost everything's gone except for the centers. I don't know how many there are."
"And the people?" she asks.
I think about the show, America 2.0. "Most of them are gone."


"It looks like the death tolls reached an all-time high yesterday." He makes a sad face.
The ticker tape goes across the bottom of the screen. The final count: 214,733. The audience stares on.
Barb sips her drink. "But the good news is the ECC's are in place and ready to take in refugees. Look at all of those tents! It'll be fun, like the carnival coming to town." She chuckles.