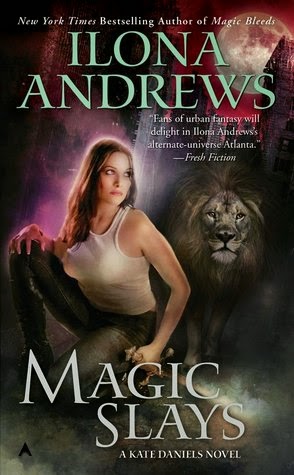 The Kate Daniels series is one that I am beyond thrilled to have read. It makes me sad to think I went so long oblivious to the greatness of this Urban Fantasy series. This one just didn't sink its claws in me and drag me under like the previous ones. It's still a wonderful read, though.

Magic Slays brings out a different side to Kate. She is vulnerable, and she's more emotional. From the left, she's getting new information about her past that's tilting her personal axis. From the right, she's questioning whether she is the one that feels more in her relationship. It really doesn't matter how awesome you think you are, you will inevitably question whether you are that one that is head over heels and your partner is with you just for kicks, or maybe even a more nefarious reason like using you for their own gain. From the center, she's hit with the pain of a mortally wounded loved one. She tries keeping it all hidden and her tough shell up for the world to see, but I'm reading her inner most thoughts so her personal struggle comes through.

Besides the action that I always adore in this series, there were also some other great moments. I found it brilliant to read Kate taking a bigger part in pack business...especially when they weren't all trying to challenge her to a fight. There was also that divine "gotcha" moment when she caught Julie doing something she shouldn't have, but was proud of her anyway. Having Andrea back in the fold is excellent as well. Every hard-as-nails heroine needs a bestie that is just as scary in different ways. I was thrilled to see the jealousy between Curran and Saiman come to a head with a hilarious video culminating in a conversation about what will undoubtedly cause Curran's jealousy to peak.

The big bad in this one would rain on any parade. In a world where magic in many different forms is so abundant, the threat to all magic users is significant. It's up to Kate to once again save the day.


There was a lull in action when Kate was learning about her past, and I was actually thinking to myself that it needed to get a move on and get it out already so we can get to the good stuff. While the information was important, necessary, and helped to shape Kate's understanding and character, it bored me as well.


It's fantastic when an author can allow two characters to come together, and have everything about that relationship still be entertaining. They definitely get in lover's quarrels, but the way they argue, talk, make-up, and work things out, is enjoyable and fun. Kate and Curran feel like a true couple through and through and I definitely felt how deeply each feels about the other.


Another great book by the Andrews pair. I love the world in this series, the magic, and the characters, While I did feel a break in the action for a while through the middle, it gets juiced up at the end. It also starts with a good bang. Recommended.

“Yes I can,” Curran snarled. “Listen: this is me telling you what you will not do.”
I raised the cookbook and tapped him on the nose. Bad cat.”

“Andrea raised her hand. “This is the hand that slapped Aunt B.”
“Maybe you should have it gold-plated.”

“Here, you can touch it, since you’re my best friend.”

“Did he just rip out the engine?" I asked.
"Yes", Saiman said. "And now he is demolishing the Maserati with it."
Ten seconds later Curran hurled the twisted wreck of black and orange that used to be the Maserati into the wall.
The first melodic notes of an old song came from the computer. I glanced at Saiman.

He shrugged. "It begged for a soundtrack.”

“Help me, I can’t breathe, your ego is pushing all the air out of the room.”