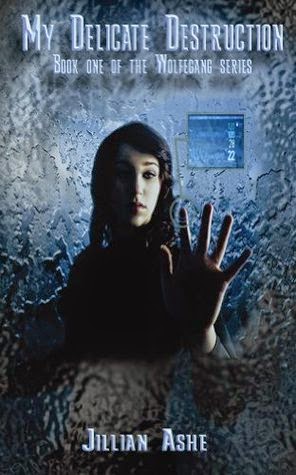 My name is Katerina Anderson. In 2016, a drug called Hope was created. Administered during suspended animation, the drug was supposed to cure the cancer my twin brother and I had. When an earthquake leveled Los Angeles, we were presumed dead.

The day I woke up, I realized everything had changed. My brother was missing, and everyone else I knew was dead. That drug and all its false promises were the beginning of my delicate destruction.

This is a novella setting up the characters and the world. I knew that going in so I also knew that it would be a short read to wet my appetite for the next full-length book in the series. Ashe sets up the characters of Katerina and Kris who are twins in their teenage bubble of friends and hobbies. The writing is delivered in a way that all the important information is provided, and not a lot of unneccessary detail. You can tell where the story is going just by reading the blurb, but I was surprised at everything that happened before the big life-changing moment.

There is a lot of room for potential in this series. Kat gets thrust ahead to the year 2518 due to what happens in this novella, and while I'm given a glimpse of what things are like in that year, I'm very excited to further explore what's going on around her in this new environment.


Obviously it's very short, but I already knew that. I have the second one to dive into now so that's not a problem. I'm a very open-minded person so how technology and the 'how's' and 'why's' are handled in books have never bothered me. I've never had an issue with how it's done because it's all up to the author's imagination...futuristic sci-fi worlds are the construct of the one writing since no one can truly tell them that they are wrong. If you are a big stickler for how it's all done in a sci-fi book, I honestly can't tell you whether you'd be ok with it or not since I don't dive deep into those areas.


There actually is a bit of romance in My Delicate Destruction. Kat has an on and off again boyfriend that she's really enamored with.  It makes for a few bittersweet moments that tug at the heart a little bit.


Short but good introduction into the Wolfegang Series. It leaves me thrilled about all the room this series has to play with and grow. Recommended for those who enjoy YA, don't mind novellas, and like a good sci-fi read now and then.

"What year is it?" he asked.
The men shared a look before answering, "2510."
They were in so much trouble. "Five hundred years," he muttered under his breath.

"We've tried this before, Kevin," I reminded him.
"I know," he said, putting an arm around my waist and pulling me closer.
"And it didn't work out." I tried to remember why I was bringing this up, but his body was making it hard to think.