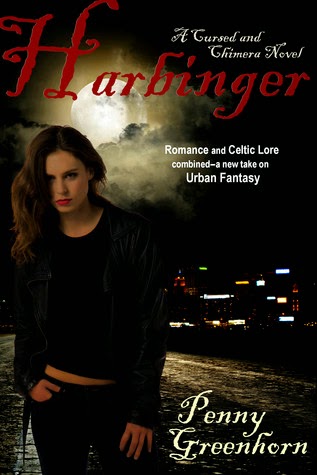 Claire Buchanan Duke has a hankering for blood, but she’s different from those cursed creatures that drink it. Unsure of what she is or where she comes from, Claire tries to get by the best she can. But the visions don’t help, and her latest is the worst yet—a picture of her death. Destined to break an age-old curse, Claire is plunged into danger, and there’s only one person capable of saving her. Soon she finds herself entwined with the black sheep of the blood-drinking community, an ill-tempered assassin with little interest in protecting her. Can Claire escape her fate?
An urban fantasy with a twist of Celtic myth and romance, Harbinger is a stand-alone novel set in a world of the Cursed and Chimera.

He was a giver, I was a taker, and the only downside to our arrangement was the required dress. To be blunt - I looked like a hooker. I was wearing scraps for clothing, a pair of boots that encased most of my leg and a layer of scarlet lipstick. But I had to blend. I was singled out enough as it was, my scent always marking me as different. And if the half-cursed and sealed community had one rule it was this: Don't attract attention.


I really enjoyed this take on V=vampires and I loved the different origin storyline involved. The heroine is rough and willing to get her hands dirty all while suffering from her own little phobias which make her a bit more real. I love the different stages the vampires go through even though they don't refer to themselves as vampires. I guess they are a bit different. I also LOVE the Chimeras in the book. I need more Chimeras in my supernatural world.


For me the bad is they spend minimal time introducing you to the villain...which normally I hate but the story was strong enough I barely noticed. I still would have liked a little more time getting to know them.

Scarlett and Dylan are still together but can he be an effective leader if he's constantly worring she will get hurt? Or will they need a new leader.


If you like supernatural books then you will love this one. The chimeras really made the book stand out and make me want more from this world. I highly recommend Harbinger.

Art spared a sideways glance. "Your spiteful."
"I was just being honest," I replied, passing the phone back. I hoisted up her handbags, keeping the looped handles over each shoulder. “So what's your real name?" I asked. “I don't want to accidentally call you you-know-what."
"Don't call me anything."
"He-who-must-not-be-named," I said ominously, wanting to make him feel stupid. "You might be surprised to hear this, but that designation is already taken."


"Why are you walking so fast?" I panted, struggling to keep up with Art as he moved around the outside of the cabin. "Are you mad or something?"
"You have preternatural abilities," he countered. "Stop whining as if you were human."
I jerked his arm, dragging him to stop in the dewy, damp grass with the abilities he'd referenced. "I didn't do anything wrong," I insisted, talking to his back. I was really speaking to myself anyway. If only I would believe me.
"The Chimera are an impetuous people," he said sharply. "They may live in the moment, but you can't afford to. You should've refused."

"Everyone dies," I told him. "Even blood-drinkers, and I didn't inherit an ounce of their longevity. It's only a matter of time, and mine is limited. You can find my attackers. You can stop them. You can kill them. But you can't save me."