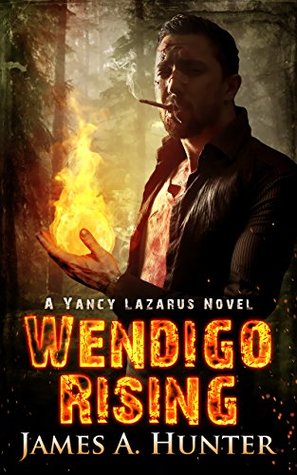 Bigfoot is real. Yancy Lazarus—mage, bluesman, and rambler—knows because there happens to be a nine-foot-tall, walking myth standing in the road, flagging him down.

Yancy just can’t escape his reputation as a supernatural Fix-it man even when cruising through the forgotten backwoods of Montana. Turns out Bigfoot has a serious problem on his hands: one of his own has gone rogue, developing a taste for the flesh of humans and Sasquatch alike. A greater Wendigo has risen for the first time in thousands of years and if Yancy can’t stop the creature it could be a slaughter for the residents of a rural Montana town.

But even with the monstrous threat looming on the horizon, Yancy has bigger fish to fry. He’s working as an agent of Fate, attempting to put the kibosh on a nefarious scheme, aimed at upsetting the tenuous balance between the supernatural nations. When your boss is Lady Luck, however, nothing is ever left to chance, and his two cases may have more in common than it appears. If he can’t figure out the missing link it could usher in a new world order: an age of inhuman creatures and walking nightmares … one where Yancy Lazarus doesn’t exist.

They might’ve been homeless methheads, but that didn’t give anyone the right to tie ’em up, hold ’em against their will, and treat ’em like animals. Like slaves. Anger reared up inside me like some mean-ass mama bear watching someone mistreat her delinquent, wayward, druggie cubs. Let’s face it, I’m basically a dirt-caked hobo myself, so these were my people.

What can I say, Yancy has become one of my top 5 favorite characters to read about. He's rough around the edges and while full of sarcasm he's pretty straightforward in his actions. Plus, he has a knack for fighting the strangest creatures with extreme consequences hanging in the balance. I really love the banter between Yancy and pretty much anyone he tries to hold a conversation with for more than 2 minutes. By the way they talk, you would think him and the chief have known each other for years. The variety of monsters showing up in this series really leaves me hungry for more. Most often it’s just vampires and werewolves and if you're lucky a ghost of some sort. With this series, you'll be eager to turn the page and see what pops up next. One last thing I really love about the series is while it builds upon the last book they never end in crazy cliff hangers.

I was left with a question regarding a particular magical item. A certain crown, hopefully in the next book we will get filled in as to what happens to it.

Well Agent Ferraro is back and that means tension with how their last encounter ended up. Plus should I mention Co-ed hot springs?

Overall, I loved getting lost in this story. It brings plenty of memories from the first two novels while standing strong on its own. Between the different types of beings showing up and the wild magic items, I love to see new books for this series. I really can't get enough. The world itself has an amazing magical feel and the fact that you can end up anywhere at any given time is fantastic. If you like urban fantasy and haven't started this series, do yourself a favor and start it already.

“Stop calling me ‘mage,’ my name’s Yancy, alright? If I’m gonna be stuck with you and your inarticulate, ill-tempered, poo-flinging father, the least you can do is get my name right.”


“Wait, is this one of the flesh-eating Bigfeet you mentioned earlier?”
“No. No, this was the good one. Well, good except for the part where he ripped my door off— his name is Chief …” I faltered for a second. What the hell was his name? “Err, Chief something or other. I can’t remember. Chankoo-koo, Chwack-wack, Chi-hua-hua— something with too many syllables, kinda earthy sounding. I just call him Kong, ’cause you know, giant, hairy ape-man with a chip on his shoulder.”


Kids, this is exactly why you shouldn’t buy those tiny, cutesy pet gators. Sure, they start out adorable and snuggly, but sooner or later they get bigger. You end up flushing them down the crapper, and they, in turn, start having babies, who will one day invade the human world, murder you horribly, and sell your leftover pieces to the highest bidder. Consider yourself warned.


“Sometimes, Yancy, to get to the bottom of a mess like this, subtlety is required. And you … well, you’re about as subtle and vulgar as a monster truck show.


“So does that mean we’ll get invites to all the parties?” I asked.
Arawn laughed, a deep, rich bark. “No. It means I will consider not eating you if you should stumble through my land again uninvited.