ARC Review: Through the Veil (The Aisling Chronicles #1) by Colleen Halverson 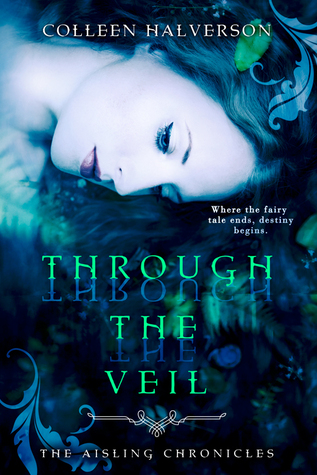 Elizabeth Tanner is no Tinkerbell, and her life is no fairy tale. Broke and drowning in student loans, the one thing she wants more than anything is a scholarship from the Trinity Foundation. But after the ancient Irish text she's studying turns out to be more than just a book, she becomes their prisoner instead. And when Trinity reveals Elizabeth is half-Fae, she finds herself at the center of a plot to save the magical races of Ireland from a brutal civil war.

As Commander of Trinity's elite warriors, Finn O'Connell isn't used to having his authority challenged. He doesn't know whether to punish or protect the infuriating young woman in his custody. When he discovers the Dark Fae want to use Elizabeth's abilities to control the source of all power in the universe, he'll risk everything to help her.

At the mercy of Trinity and enslaved to the Dark Fae, Elizabeth finds herself alone on the wrong side of an Irish myth thousands of years in the making. Refusing to be a pawn in their game, Elizabeth has to fight her way back to the man she loves, but to do so, she must wage her own war against the magic that binds her.

THROUGH THE VEIL will be available February 22nd 2016 through Entangled Publishing.

Book 1 of the Aisling Chronicles Series

I knew two things. One: I was on my own. And two: I wasn't going out like this.


Fae! I love stories with the Fae because they have some amazing magic and are generally not to be trifled with.

I can't even imagine where the story will go from here.  It starts off with Elizabeth noticing strange things around her and throughout she's kidnapped numerous times, tortured, married, and it ends with her right back where she started. Through the Veil had twist after twisty twist and leaves you wondering how you'd fair in Elizabeth's shoes.

Elizabeth was living a completely normal life, almost boring even, and was ripped away from it to become a prisoner of the Fae where our laws don't matter even a tiny bit. I love how Halverson took us through Elizabeth's journey with harsh glimpses at what she was going through without lingering too long on it to where it would saturate. She really had a hard time of it. Elizabeth is stubborn through the whole story, but grows a lot darker and hard while still remaining soft and protective towards certain characters. She starts ticking a list off in her head of who she is going to exact revenge on and she's determined to see it through. Her powers are quite interesting too. I have a feeling by the end of the series she will be quite the bad ass. I feel like this series has a ton of potential.


My only complaint is seeing some cliches here: the forbidden romance, the lost princess, and the big super awesome power that no one else has.


Well, Elizabeth and Finn fairly sizzle with heat for each other. This was almost a lust-at-first-sight between the pair. There were definitely some good steamy scenes with the two of them as well as some truly heartfelt moments later on. I like these two together so it will be interesting to see how it plays out. Elizabeth's initial interactions with sexy Irish-man Finn had me laughing quite a lot. She has no intentions of letting him control her. This is not a YA romance.


Through the Veil is a very promising start to The Aisling Chronicles. So much went down in these pages, and there's still more to come which I feel will only get bigger and better from here. I loved getting to know Elizabeth who is flawed but incredibly strong as well as the other characters in the story. I also enjoyed the many twists and the magic that filled the story. I will definitely be continuing the series. Recommended.

My stomach gurgled in response. "Something you should know about me, Finn, is that I'll probably do just about anything for a free lunch."
Finn winked, slinging the backpack over his shoulder. "I'll note that for future reference."

A well of silence opened up in the space, and I stared at the door Finn had bolted through, wondering in anguish if he would come back for me, if he was just going to abandon me here in this dungeon.

Swords don't appear out of nowhere. Giant snakes don't exist. I repeated this over and over, but the signal my eyes sent to my brain told a different story. I blinked hard, trying to focus the scene, trying to right itself again. It was like one of those Highlights magazines I used to look through at the dentist's office. What two things don't belong here?