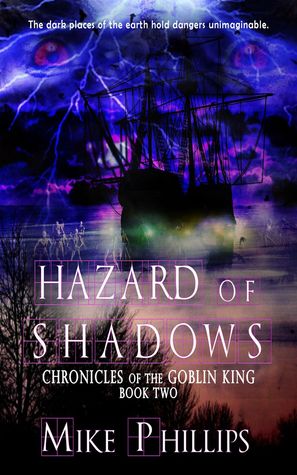 The enchanted creatures of legend still exist, taking refuge from an age of camera phones and government labs in a secret place called the World Below.

After leading a revolution against Baron Finkbeiner, the despotic ruler of the World Below, Mitch Hardy has taken the throne. Unknown to him, ancient powers are at work.

The Lords of Faerie seek to revenge the death of Baron Finkbeiner and recover the mysterious Blade of Caro. Soon Mitch is fighting for his life against hellish monsters, the likes of which he never imagined.

“Anyway, get thee gone to a distance of not less than five hundred miles from this place, and you will not be harmed.”

The goat devil roared with laughter. “By you and your little kitty cats? How frightening,” he said mockingly.


This one so far has been a modernized version of normal guy meets a fairy princess and becomes the hero. Only the buddies he fights with are goblins. Yep, instead of fighting goblins he has pizza parties with them when not fighting other creatures. I really like the flow of this one as Mitch our hero spends half his time dealing with real life and regular friends and the other half dealing with magical creatures and their magical problems. Elizabeth his fairy princess is a carefree individual who is chill because she knows how powerful she is. Instead of reacting to threats she mostly just makes fun of them with sarcasm.


The only thing I haven't enjoyed with the series so far is the goblins can be a bit gross at times. I wish those moments were left to the shadows and not discussed so much. Just a personal preference.


Mitch and Elizabeth, one a normal guy and the other a fairy princess, are trying to make things work. Problem is Elizabeth keeps running off trying to track down her father and Mitch is feeling a bit left out.


I really enjoyed part 2 of this series. I felt like a lot of ground work was set up in order to prepare us for future installments. We get to meet more of the supernatural creatures in the underworld and a few that are hanging out up top blending in to normal society.  If you enjoy urban fantasy with a bit of a twist I think you’ll enjoy this series.

Shaking his head, Mitch said, “That’s no big deal. We’re all learning how to get along. Even Gullysack is using the toilet now.”
“That’s just it. We ain’t want to be no house trained poodle dog.


This too was all part of the magical defense. If the goblins told him how to defeat the security measures, then it would be vulnerable to discovery by magical means. He would have to figure it out by himself. His friendship would show him the way.

“You might as well let him go,” Beene suggested. “I don’t know the chap, never seen him before in my life. Be a good little monster and chase him away for me. That’s the best course of action. Ain’t no use spillin’ any more blood over little old me.”

“No ma’am, he’s right as sun on the daisies on that one.”
So unused was he to hearing anything but profanity from Thudrott, Mitch gave him a questioning look. “What? Just ‘cause you don’t know how to treat a lady, don’t mean the rest of us are the same way. Right guys?”
“Yeah,” the goblins replied.