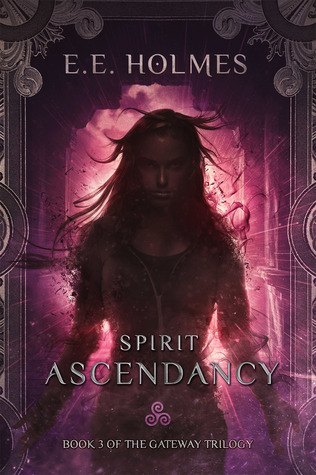 IN THE WAKE of their terrifying escape from Fairhaven Hall, sisters Jess and Hannah Ballard find themselves on the run, pursued by the two most powerful groups in the history of the spirit world. On one side, the Durupinen, determined to capture the girls and prevent their role in an ancient prophecy that promises to destroy them and unleash the spirit hordes on the earth. On the other side, the Necromancers, ancient enemies of the Durupinen, hellbent on bringing the same prophecy to fruition. When the girls are betrayed and one of them falls into the Necromancers’ hands, both face decisions with cataclysmic consequences.

Will the lure of power prove too great to resist, or will the bond between the sisters survive this last, most crucial of tests?

"There was still a lot I needed to learn about dealing with spirits, but one thing I had managed to learn at Fairhaven before torching the place to the ground was that a spirit was pretty set in its ways, much more deeply than a living person."

This was a really enjoyable series. I'll be looking for more from this author in the future.

Holmes created a world that felt quite real. I loved how this one went to another location and gave us a glimpse of more characters. This one, as the finale, was more intense in purpose and action. Jess was always on edge and rushing to find out more information and learn all that she could 'in time'. It put a nice pace to the story. I am a fan of Holmes being able to kill off characters as well.

I've very much enjoyed the characters. I love how they are all flawed in different ways and even how their quirks and personalities are all so different.

The way that it was summed up at the end was rather satisfying.

My small complaint is that I saw the twist coming. It is really hard to surprise me though so I don't think every reader will.

In the first one, Jess is drawn to a boy very quickly and none of that made a lot of sense to me. Throughout the last two, it looked like Finn and Jess were going to be a thing. I really loved Finn's character, but although you know they have feelings for each other, it ended quite in the air.

A lovely way to end the series. I enjoyed the many different settings, the array of characters, and the plot. This one was a little more on the action side than the previous two. I wouldn't read the series for the romance, but I would read it for the unique spin on the ability to see ghosts. Recommended for paranormal fans.

"No, you were right," I said, doing my utmost to keep the bitterness out of my voice. "All you were trying to do was save my life, and I attacked you for it. It was a shitty way to behave, and I'm sorry. I wasn't mad at you, not really. I was just mad that leeching was our only choice. But it really was the only choice, and I know it wasn't easy for you to make it. So thank you. Thank you for saving my life."

It was at the very zenith of our tension, just after Finn had shouted at me for drumming my fingers on the table, and I had opened my mouth to literally release the Kraken on him, when the door to the flat burst open. Everyone screamed, and Finn leapt to action impossibly fast, which would have been impressive, except for the fact that "leaping to action" meant tackling me to the ground and shielding me with his body.

Rough hands seized me by the shoulders and dragged me, half-conscious, from my seat. I was too started even to yell, but couldn't have made a sound even if I tried as a wad of fabric was stuffed roughly in my mouth. Muffled should told me that Savvy, Annabelle and Finn were also being pulled from the car. Sudden small flares of light burst in front of my eyes as I was thrown to my knees in the tall grass, and it was by these lights that my eyes adjusted and I could finally see who had attacked us.
Posted by JezzebellJC at 12:00 AM