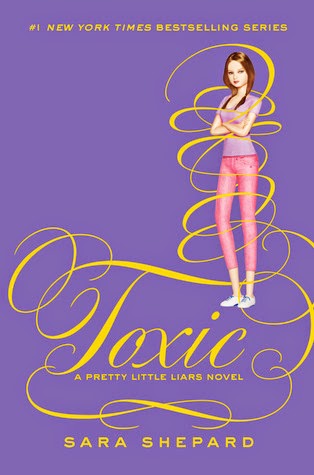 One A has been captured…but the most dangerous A of all is still out there in the penultimate installment in Sara Shepard's #1 New York Times bestselling Pretty Little Liars series.

High school seniors Aria, Emily, Spencer, and Hanna barely survived their most recent encounter with A. And it's not over yet…. The police don't believe there's another, deadlier, A out there, but the girls know what-and who-they saw. If they don't track down this final tormentor soon, A will silence them forever.


So Toxic is the 15th book (and supposedly the 2nd to last in the series- But it has been stated that other books would end the series and here we are at book 15).  This book picks up right where the 14th ended.  Ali got away and pinned everything on her side kick Nick.  She is still after the girls and back with a vengeance.

In this installment it’s summer break and A is a back stronger than ever.  Each girl gets some sort of big “break,” but A is behind all of it and quickly turns their worlds upside down yet again.  No one believes them that Ali is still alive.  So they set out to find the truth for themselves.

BRING YOUR A GAME


What I love about this series is the characters and all the drama.  Ali keeps getting crazier and crazier, and pulling off bigger stunts.  The girls entertain me with how incredibly stupid they can be sometimes.  It is like watching a horror movie when the girl goes out in the woods and trips and falls as the bad guy gets closer and closer.   They fall directly into A’s traps every time!  Hannah gets a movie roll in a movie about the PLL lives along with big time movie stars.   A major art dealer just randomly calls the art gallery and buys a picture of Ali that Aria painted making her a heavy-hitter in the art world.    Spencer is at the top of her game with her blog about anti-bullying.  The blog is getting lots of attention, and this heart throb comes out of nowhere with a sob story that sweeps Spencer right off her feet.  Emily’s long lost love, Jordan, finally contacts Emily and wants her to come visit her in jail.   She finds out Jordan may be getting out within the month.    All of these events were set in motion by the one and only Ali who plans on taking them all out.  Who doesn’t love a vindictive crazy chick?

“Once upon a time there was a girl whose mind was like a never ending chess game  Even when she seemed beaten, she always had a plan- And she wouldn’t stop until she won.”


WILL THIS CHICK EVER DIE


As much as I heart this series, all good things must come to an end at some point.   This series is past that point.  It’s getting to where I cannot disband my disbelief that any ONE human being can be that stupid, much less FOUR of them.  For example, the girls have a good guess at where Ali has been hiding.  Some remote house in the middle of some obscure town in the woods.  Do you think they once thought “hey let’s call the cops”?   Nope they decided "hey lets go up to the woods AT NIGHT IN THE DARK  to look for the girl who has tried to kill us numerous times, set us up for awful crimes, and has ruined every aspect of our lives".   That sounds like a great plan yes let’s do that!  Spencer spills all their little secrets to a boy she JUST meet from the BLOG.  Because that has good idea written all over it.  It has worked so well in the past.   I can no longer justify the girls decisions in my rational mind.


YES THIS IS MY FINAL ANSWER


Overall, like all books this one has its good points and its bad points.  As a fan, I do get a little excited knowing I get to know a bit more about the girls.  I get to delve a little bit deeper into Rosewood.   I am ready to get all the answers and let the series end before it is drug completely into the ground.  I hope the last two books WOW me and AMAZE me!   Sara better end this series on a high note or this chick will be pissed she read 17 books for nothing!!!