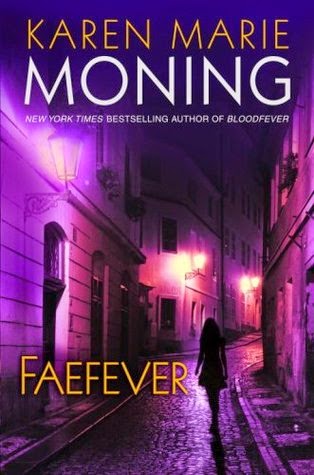 The New York Times bestselling author of Darkfever and Bloodfever returns to Dublin’s Fae-infested shores in a bold, sensual new novel. Hurtling us into a realm of seduction and shadows, Karen Marie Moning tells the enthralling tale of a woman who explores the limits of her mysterious powers as she enters a world of ancient sorcery—and confronts an enemy more insidious than she could ever have imagined.

He calls me his Queen of the Night. I’d die for him. I’d kill for him, too. When MacKayla Lane receives a torn page from her dead sister’s journal, she is stunned by Alina’s desperate words. And now MacKayla knows that her sister’s killer is close. But evil is closer. And suddenly the sidhe-seer is on the hunt: For answers. For revenge. And for an ancient book of dark magic so evil, it corrupts anyone who touches it.

As All Hallows’ Eve approaches and the city descends into chaos, as a shocking truth about the Dark Book is uncovered, not even Mac can prevent a deadly race of immortals from shattering the walls between worlds—with devastating consequences...

“I was adrift in a sea of questions and if answers were lifeboats, I was in imminent danger of drowning.”


Mac is changing. She's shades of gray mixed in with the pink she's trying to hard to cling to in order to maintain something of her usual self. As I read her story, I feel like we're best buds, hanging out in the living room, and she's giving me a bit of backstory about herself that I hadn't heard yet. I'm not sure why the writing pulls me in so much that I feel such a great connection with her, but it does. She is surrounded by characters that would drive me insane. All of them want something from her, all of them lie to her constantly and keep her in the dark, and all of them expect her to put up with it and follow the status quo. She's having none of that, and I would be disappointed in her if she did.

In Faefever, I feel like she finally came to the conclusion that she wasn't going to be able to trust anyone and she would have to make due with what was in her power. She tries to manipulate things between Barrons and V'lane, and oddly enough, sometimes it works. She's attempting to shield herself against "Voice" with Barrons help. That means that hopefully no one could use it on her to bend her to their will. I'd be wanting to learn it ASAP as well. Barrons and Mac have a chemistry there that's undeniable, but also it's just a tension not really manifesting as more right now. V'lane is showing Mac more of himself in hopes to win her over.

She learns more about Christian MacKelter and Rowena (or "Old Lady" as Mac calls her). Christian seems like the one true person willing to offer her some information. It's just too bad he doesn't really know a lot.

The action comes on hard in the latter half of the book. I genuinely love that I'm driven by that 'have to know more' mentality while reading Moning's twisted characters, powerful magical objects, and fae world.

There were a number of fantastically humorous moments to be found in this one. I especially adore Mac's ability at making up names for things that everyone else latches on to and uses as well.

The beginning was a little boring again for me in this one. Also, the ending is debilitating with an absolute cliff-hanger and horrible experience that I could have done without, but I'm assuming that Moning didn't feel her character could go without it on her journey.

Mac can't trust anyone enough to actually be romantic with them, but there is steam coming out of her ears every time that Barrons and V'lane is around. She gets pretty warm about Christian as well. The chemistry is there more with Barrons though, and it's even more delectable because he's SO. DANG. MYSTERIOUS.

A big move for this series that will definitely alter where everything goes from here. Some new information is presented and I am foaming at the mouth to read the next one. The action is heart-pounding at the end especially, and Mac narrates directly to me as if we're sisters from another mother. Recommended.


“Nobody looks good in their darkest hours. But it's those hours that make us what we are.”

“I moistened my lips. His gaze fixed on them. I think I stopped breathing.
He jerked so sharply away that his long dark coat sliced air, and turned his back to me. “Was that an invitation, Ms.Lane?”
“If it was?” I asked, astonishing myself. What did I think I was doing?

“The key to resisting Voice," Barrons instructed, "is finding that place inside you no one else can touch.
"You mean the sidhe-seer place?" I said, hopping like a one-legged chicken.
"No, a different place. All people have it. Not just sidhe-seers. We're born alone and we die alone. That place."
"I don't get it."
"I know. That's why you're hopping.”

“When Barrons looks at me like that, it rattles me. Lust, in those ancient, obsidian eyes, offers no trace of humanity. Doesn’t even bother trying. Savage Mac wants to invite it to come out and play. I think she’s nuts. Nuts, I tell you.”
Posted by JezzebellJC at 12:00 AM