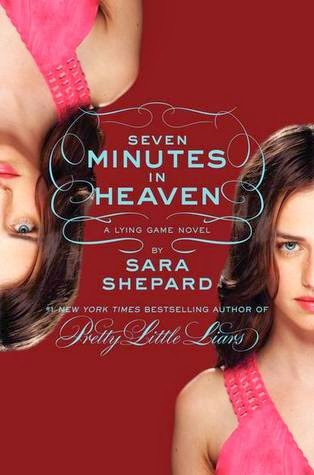 My sister wants the truth.

But sometimes the truth hurts.

For months, my long-lost twin, Emma, has been living my life and trying to solve my murder. She's unearthed dark secrets about my friends, my family, and my tangled past. But when it comes to finding my killer, she keeps running into dead ends.

Until my body shows up in Sabino Canyon. Suddenly everyone knows there are two girls who look like Sutton Mercer—and that one of them is dead. At first the police assume the body is Emma's. But as questions and accusations start flying, it's harder than ever for Emma to keep playing me. The truth is bound to come out eventually. And when it does, Emma will be suspect number one in my murder investigation. If she can't find my killer before time runs out, she'll end up behind bars . . . or worse.

“My sister wants the truth, but sometimes the truth hurts”


In this final installment of the lying game series, we finally get answers and closure.  Sutton is murdered and as a ghost gets to see her life through her long lost twin sister that she only discovered after her death.  Emma tries to figure out who murdered her sister while pretending to be Sutton.

Sutton Mercer had the perfect life, great friends, and a gorgeous boyfriend until she was murdered.  The killer forced Sutton’s twin that no one knows about to pretend to be her.  Emma has been living Sutton’s comfortable life for a little while now.  But when Sutton’s body is found, Emma is suspect #1 for her murder.  Now the pressure is on for Emma to find the real killer before she ends up in jail or dead.


“The police found a body in the Sabino Canyon.  They think it’s your sister”

IT’S LIKE PLAYING CLUE- AND THAT’S MY FAVORITE GAME


I am in absolute love with this series.  It has an interesting and unique plot and is a murder mystery at its finest.  Since it’s told from Sutton’s POV through the eyes of Emma, you get a unique perspective from both of the girls.   You get a genuine feel for them and can see how even though they never met, how much they have learned from each other.   It is a lot like the PLL series.  At some point, everyone seems like a suspect.  It’s also frustrating knowing it could be anybody and not trusting anyone, but that’s what keeps me hooked.  I HAVE TO KNOW WHAT WILL HAPPENS NEXT!  I also appreciate that Sara did not drag this series into the ground like she is doing with PLL.   No one in Sutton’s family knew she had a twin, so since they find out Emma’s true identity in this book it is a definite page turner.  There are lots of emotions and mystery in Seven Minutes in Heaven.  Such wonderful and diverse characters, great plot, this is A+ reading to this chick.


What did I not like about this great series?   Well the killer was revealed and... it was the person I guessed in the VERY FIRST BOOK.  Granted, there were a lot of distractions along the way, but it was still a little disappointing.   The killer was always the obvious choice, at least to me.   If not for that I would have given this book  5 stars.


“Does it really matter, she’s gone the why doesn’t change that”

ALL GOOD GAMES EVENTUALLY COME TO AN END


Overall love the series.  Great, fun, easy, short reads.  Engaging characters and a plot with lots of twists and turns that will keep you reading.  I HIGHLY recommend!

“A girl’s got to get lucky sometimes even me”

The Lying Game #6: Seven Minutes in Heaven at Amazon