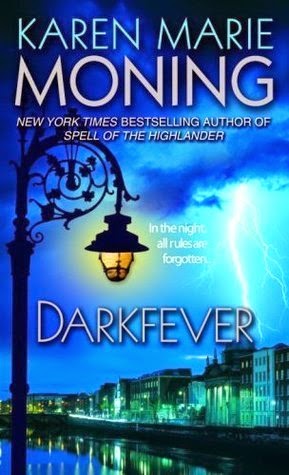 MacKayla Lane’s life is good. She has great friends, a decent job, and a car that breaks down only every other week or so. In other words, she’s your perfectly ordinary twenty-first-century woman. Or so she thinks…until something extraordinary happens.

When her sister is murdered, leaving a single clue to her death–a cryptic message on Mac’s cell phone–Mac journeys to Ireland in search of answers. The quest to find her sister’s killer draws her into a shadowy realm where nothing is as it seems, where good and evil wear the same treacherously seductive mask. She is soon faced with an even greater challenge: staying alive long enough to learn how to handle a power she had no idea she possessed–a gift that allows her to see beyond the world of man, into the dangerous realm of the Fae….


As Mac delves deeper into the mystery of her sister’s death, her every move is shadowed by the dark, mysterious Jericho, a man with no past and only mockery for a future. As she begins to close in on the truth, the ruthless Vlane–an alpha Fae who makes sex an addiction for human women–closes in on her. And as the boundary between worlds begins to crumble, Mac’s true mission becomes clear: find the elusive Sinsar Dubh before someone else claims the all-powerful Dark Book–because whoever gets to it first holds nothing less than complete control of the very fabric of both worlds in their hands…

“My philosophy is pretty simple – any day nobody’s trying to kill me is a good day in my book.”


I haven't gone through this series in quite some time, and I don't have any reviews up for it so I wanted to give it another read through.


Mac on the surface is a girly-girl, Barbie reincarnate. She has the long blond hair, long tan legs, and loves the color pink (along with rainbow hues). However, she's shaken and stirred when she finds out that her sister has been murdered over seas. When Mac goes to Dublin, she literally has no one. She leaves behind grief-stricken parents who aren't really talking and comes to Ireland where she doesn't know a single soul. She's on a quest for vengeance though, so that's of little consequence right now.

Along the way, she meets some truly spectacular characters and sees things that are way out of her league of understanding. She learns of a dark world hidden from her in the small provincial town she grew up in. She's now surrounded with Fae, and boy are these guys scary. Moning's interpretation of the Fae are evil even though they are split into the two courts of Light and Dark (or Seelie and Unseelie), they are all bad. Moning provided such a deep and detailed world with numerous types of Fae, a catalog of mysterious characters, and objects of power with different abilities.

Mac ends up having to work with Jericho Barrons who is an all-around cocky, mysterious, oddly elegant, hard-angled, and truly Alpha male. One of the best things to me is that the characters of Mac and Barrons need a lot of work. They are very flawed in the beginning. Mac is a bit entitled and sugary sweet, and Barrons is too rough around the edges and doesn't care about anyone but himself. Watching Mac grow bit by bit was wonderful. She is still her sun-loving, bikini-wearing, rainbow girl deep inside, but she's also getting new sides to her that are amazing to read about. She's developing hard edges were she needs them. Barrons didn't really grow much in this one, but he has plenty of room for growth as a character and I love him anyway.

The beginning was a bit on the slow side. Learning about Mac and her finding out the news about her sister was a little boring, but necessary. Then the trip to Ireland was well detailed for some world-building, but again, just slow. Things picked up dramatically after that though.

This series is for an older crowd. There's not much romance to really speak of, but situations are mentioned in detail.

A great start for the series. The information of this abundant world isn't overwhelming, and is easy to grasp. The enigmatic characters make for good suspense because Mac doesn't have a clue who to trust. As a reader, you want her not to really trust anyone because it would be to her detriment. I love the intrigue, the unique world, the detailed and deep descriptions of the Fae, and just how scary they are. Excellent read that I recommend.


“Last night you said you wanted to know what to expect so you could better select your attire. I told you we were going to visit a vampire in a Goth-den tonight. Why, then, Ms. Lane, do you look like a perky rainbow?”

“When insane things start to arrange themselves in sane patterns around you, you know you got problems.”

“You, Ms. Lane, are a menace to others! A walking, talking catastrophe in pink!”

“I love books, by the way, way more than movies. Movies tell you what to think. A good book lets you choose a few thoughts for yourself.”

“I wondered what one wore to visit a vampire. The chic red sweater set didn't go so well with my darker hair, and I was afraid it might be construed as a flirtatious invitation to color me bloodier.”
Posted by JezzebellJC at 12:00 AM