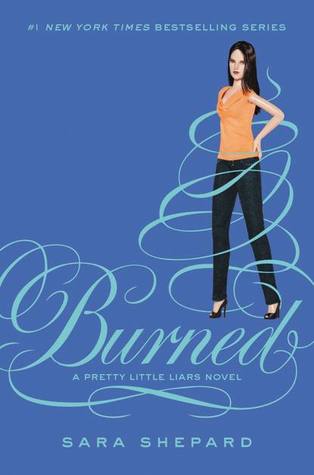 Goodreads Summary
It's spring break, and the pretty little liars are trading in Rosewood for a cruise vacation. They want nothing more than to sail into the tropical sunset and leave their troubles behind for one blissful week. But where Emily, Aria, Spencer, and Hanna go, A goes, too. From scuba diving to tanning on the upper deck, A is there, soaking up all their new secrets.

Emily is smooching a stowaway. Aria's treasure-hunting partner is a little too interested in her booty. Spencer's going overboard trying to land a new boy. And a blast--or rather, a crash--from Hanna's past could mean rough waters ahead for everyone.

The liars better tighten their life jackets. A perfect storm is brewing, and if they aren't careful, A will bury them at sea. . . .

"Never trust a pretty girl with an ugly secret.”

Everyone has that guilty pleasure that they just cannot turn away from.  Mine happens to be Pretty Little Liars.  The TV show and the books.   The latest in the Pretty Little Liars series is the 12th installment titled Burned.   If you have never read any of the books, or have been denied the pleasure of the shows, here is a very quick summary.  This series is based around a group of friends: Aria, Emily, Hanna, Spencer, and Ali.  During a junior high summer sleep over Ali disappears.  Three years later, her body is discovered.  Here comes the kicker, the 4 remaining girls start getting torturous text from a mysterious "A".   This A happens to know all their deepest darkest secrets that only Ali knew.  This A also seems to be watching their every move, keeping all the girls on edge.  A is out to destroy their lives.

In need of a much needed break from their hometown of Rosewood, the liars embark on a school sponsored cruise.  It doesn't take long for the girls to realize this mysterious "A" is on the ship with them.   Emily meets a new love interest who may not be who she seems to be.   Spencer fears A may be after her crush.  Aria meets a new guy who has an interesting connection to someone from her past.  Not to mention, her boyfriend is not thrilled about her spending so much time with this new friend.  Hanna got stuck with Naomi as a roommate.  Naomi is trying to become bff's with Hanna after years of animosity.  How much havoc can A bring into these girls' lives on the cruise ship?   More than you could think.

Since these books are actually targeted for a younger audience, they are generally a very easy fast read.  We get to meet new people since the cruise includes not only Rosewood Day, but other surrounding schools.  I liked the fact they were on a cruise ship far away from Rosewood, and A still manages to mess up their lives.  It gives a fresh feel while having the old formula we know and love. Also making Hanna and Naomi friends was a good move to me.  We got to see more of Naomi who we see through out the books but don't really know since she is such a minor character.  So I liked getting to see her vulnerable side.   The books are much like the show, you finish it and you still don't know anything new per se when it comes to A.  While it is tortuous to me not knowing who "A" is, I enjoy and look forward to trying to figure it out.  It's what keeps me coming back.  I do however have my theories :)

What was not so great:

The event that this book kind of turns on happened BEFORE the events in the 9th book.  However, this book/story does take place in real time in the series.  Meaning it does follow the events from the 11th book.   That being said, the event is a pretty traumatic accident.  It is explained by saying the liars have pushed back the awful memory and had almost forgotten it.   The accident talked in detail in the intro chapter, involves the girls getting in a car accident fleeing the scene, and leaving a girl for dead.   It just bothered me that she made this event happen in between books but this was never mentioned.  I find it hard to believe that A who apparently knows about this accident didn't bring it up until now.  Maybe it is a small thing but it really bothered me for some reason.   And my love/hate relationship with this series, I don't know who A is.  I love the fact A isn't revealed in a way because I like the suspense. It keeps me coming back...... but inquiring minds want to know :D

If you are a fan of the series, it is a definite read.  If you have never read the series, I highly recommend it.  I do suggest you start with book 1 though.   Burned was not my favorite in the series.   Did I enjoy it? Yes.   I have mixed feelings over all for it though.  I liked the book as a whole because it had fun twists and turns in it.   I just hated the continuity issues with the accident and why "A" has never mentioned it until now.  That is not very "A" like.  It did leave me with excitement for the next book!!!!!   I can't wait to see what "A" has in store for the Liars next.

"Don't get too comfortable. It's not over until I say it is. -A"