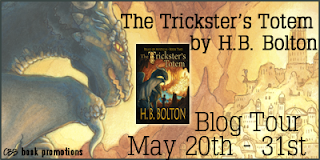 Welcome to my stop on the Trickster's Totem by H.B. Bolton Tour hosted by CBB Book Promotions. I would really like to thank H.B. Bolton who wrote Relics Of Mysticus and Candace from CBB Book Promotions for working it out for Zane, my 10-year old, to review the first two in this series for this blog tour. I would also like to thank Zane for doing what, in my opinion, is an excellent job reviewing them! He wrote them by himself. He's done an interview with me before, but these are his first reviews.

Evan and Claire Jones are typical teenagers, forced to go with their parents to yet another boring museum ... that is, until something extraordinary happens to make their day a little more than interesting. After following a strange little creature into a closed exhibit, Evan and his older sister, Claire, discover the Serpent’s Ring, one of the magical relics formed from the shattered Mysticus Orb. Purely by accident, they have awakened its powers and opened a portal to Sagaas, land of ancient gods.

Before the siblings can comprehend what has happened, the Serpent’s Ring is wrenched from Evan’s hand by an enormous fish and flown back to Aegir, the Norse god of the sea. Evan and Claire, accompanied by a band of unlikely heroes, must retrieve the Serpent’s Ring before Aegir uses its immense powers to flood all the lands on Earth.

The Serpent's Ring: Relics of Mysticus (Volume 1) -
FREE on Kindle at Amazon from May 28th to June 1st

I received this book from the author for an honest review.


I really like the magic aspect of this book. Not only are they in a magical realm with magical creatures, but the ring gives them magical powers. I also really like the characters in the book. There were two over-excitable imps named Barfel and Dunkle. There is an immortal dragon slayer named Sigurd, and there is a gorgeous mermaid named Lazonia.

I thought and thought for about half and hour before deciding that there was nothing bad to mention in The Serpent's Ring.

Evan and Lazonia have great chemistry and by the end of the book they are an official couple. Claire and Sigurd didn't have as much chemistry as the others, but you could tell that they were truly in love.

I REALLY enjoyed this book. I am definitely adding this to my list of favorites.

Life has returned to normal for fourteen-year-old Evan and his older sister, Claire. That is until Dunkle, a clever but stinky little imp, pays an unexpected visit to their school. He has come to take the siblings back to Sagaas, the mythical realm of the gods. Once again, a Relic from the ancient Mysticus Orb has fallen into the wrong hands. Only Evan and Claire, with their unique mystical abilities, can help find it.

Through the power of the Trickster’s Totem, a coyote trickster has escaped. His laughter echoes throughout the realm, as he spreads mischief and mayhem. He burns an entire crop of popcorn, carves his grinning image into sacred artifacts, and things really get interesting when he shape-shifts into Evan’s friends.

Claire and Evan must capture the Trickster, retrieve the Totem, and be careful not to become sidetracked by robotic Steampunk animals, “sweet” pixie-like Pains, and a problematic mermaid … all while dodging Mothman-like aces. Most surprising, Evan discovers the true reason dragons exist in the Native American Spirit World.

"Do you have something more important you should be doing?"

I received this book from the author for an honest review.


I said that I liked the characters in the other book and this time I enjoyed the fact that Bolton brought some new interesting characters into the mix. There was a snarky mermaid named Amadahy. There was an immortal Native American named Chayton. There was even an extremely awesome dragon named Khel. I especially enjoyed the uniqueness of the bad guy specifically in the end.

I didn't like that there wasn't really any of Sigurd or Lazonia because I really enjoyed both of them in the The Serpent's Ring. I also didn't like that Claire flirted with Chayton even though she was still dating Sigurd.

Other than some flirting by Claire with Chayton, there isn't any to mention with this one.

Another amazing book. This was an awesome story with an unique bad guy and some interesting newbies. 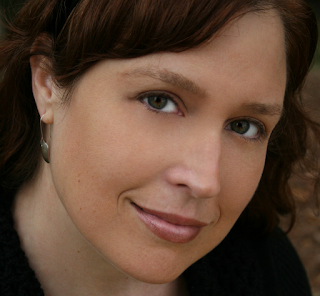 A magical part of H.B. Bolton’s childhood was being swept into worlds of enchanting characters, fantastical creatures and extraordinary powers—simply by picking up a book. As a mother and a teacher, she was compelled to create imaginary worlds of her own in order to share them, not just with her children, but with all children. H.B. Bolton lives in Florida with her supportive husband and two highly spirited children. Shh, can you keep a secret? Not only does she write books for the young-at-heart, adventurous sort who yearn to dive into a good young-adult fantasy story, she also writes spellbinding, heart pounding women's fiction. These particular books are written under the name Barbara Brooke, but that's another story, altogether.

Click here to see the Tour Schedule
Posted by JezzebellJC at 12:00 AM