Review: Gameboard of the Gods (Age of X #1) by Richelle Mead 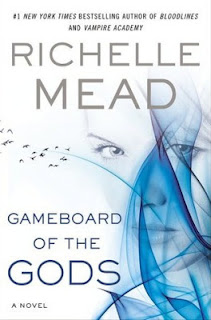 Goodreads Summary
In a futuristic world nearly destroyed by religious extremists, Justin March lives in exile after failing in his job as an investigator of religious groups and supernatural claims. But Justin is given a second chance when Mae Koskinen comes to bring him back to the Republic of United North America (RUNA). Raised in an aristocratic caste, Mae is now a member of the military’s most elite and terrifying tier, a soldier with enhanced reflexes and skills.

When Justin and Mae are assigned to work together to solve a string of ritualistic murders, they soon realize that their discoveries have exposed them to terrible danger. As their investigation races forward, unknown enemies and powers greater than they can imagine are gathering in the shadows, ready to reclaim the world in which humans are merely game pieces on their board.

Gameboard of the Gods, the first installment of Richelle Mead’s Age of X series, will have all the elements that have made her YA Vampire Academy and Bloodlines series such megasuccesses: sexy, irresistible characters; romantic and mythological intrigue; and relentless action and suspense.

A Lethal Bodyguard and Shadowy Phantoms

This is probably the hardest book that I've had to review so far. I have put it off for days, and finally I had to pull out a rating system and do this the mathematical way instead of just rating from my heart like I usually do. Normally, books are easy for me to rate: I love them, I like them, they were meh, etc. This one was a so-so book for me personally. I went into it with way too many expectations and that's my fault. I love Mead's previous works the Vampire Academy series and the Bloodlines series which are both YA. She has a way with characters and surprises that I enjoy. This is an adult book and I will go ahead and forewarn everyone that IMHO this is nothing like the previous books that I have read of her's as far as story and the way information was given. Also, for some reason, I had a Hunger Games-like picture in my head after reading the summary (but involving Gods) so again that's on me for having expectations that I shouldn't have and isn't what the book is about. Now let's get to the review.

The introduction of Justin was my favorite part. Although there were a lot of questions surrounding the beginning with both characters Mae and Justin, I really enjoyed the meeting of the two in Panama. I like seeing action, strength, and paranormal and I got to see all of this when Mae and Justin first met. Mae is stronger than most people so to me this is really the most paranormal or magical aspect I got out of the book other than some talking ravens. I'll get to that later. She did remind me a little of Rose and you may hear some others comment on this, but I liked this about her. She is very strong, stubborn, and gorgeous, but that's really where the resemblance ends. Justin has addictions, laziness, is a womanizer and will inexplicably break out and help a weaker younger female. Sound familiar? These were my favorite parts of the story.

Justin and Mae are good together. I really like the scenes that have the two of them getting along and must admit that when they are the chemistry is off the charts.

There was another part where a lady attacks Justin in a bathroom causing Mae to fight her in quite a great battle scene. I enjoyed this as well.


My greatest dislike was that the book needed too much explanation, and I still didn't feel like I got enough to understand what was happening. I will admit that for most of the book, I was confused. I was confused about the way the world worked in general. I was confused about why some people were considered Patricians or Plebians. Mae is a Patrician, a Praetorian, and a Nordic. It gets confusing understanding all the nuances of what these words mean or why she is even considered being them. I didn't even really understand what a Praetorian was even though I did understand that everyone in the world was afraid of them because they healed quicker and were faster and stronger than anyone else. I was confused about why half the world seemed to leap forward so much (with cars that drive themselves) and the rest leaped backwards (with needing a chaperone to go on a date and arranged marriages). I was confused about WHY Gods would suddenly be interested in running the lives of people on Earth. As you can tell, most of the story, I was scratching my head and not really clear about what was going on. This could have just been me being dim-witted and may not affect others in the same way.

There are talking ravens. Doesn't really sound like that big of a deal, but I didn't find out why they were there or what their purpose held until quite a bit into the story. They just appear, and you are supposed to accept them for what they are.

I don't really understand the reason for Tessa or Justin's sister and nephew as part of the story at all. I also didn't really grasp the need for Dominique who is greatly disliked through the whole thing, but turns out helping a little at the end. There are so many characters that we dive into their back-stories and learn a ton about that really fed nothing into the plot that I could tell. Maybe they will be bigger parts in the future books?


The book starts out strong with a romantic meeting and very nice chemistry between Justin and Mae, but they quickly learn who they are and that they are lying to each other and it fizzles faster than you can say (in Paris Hilton's accent), "That's Hot!" While I spent most of the rest of the book hoping for a reconciliation, there are numerous factors at work keeping these two apart. I hope for more in books to come.

Also, there is a sexual assault to watch out for.


In my opinion, it was neither good or bad. There was a lot left to be explained and a lot more potential to be explored between the characters. I'm not in love with the plot of the book yet because I just don't understand it. I do think there is hope for the rest of the books in the series to go somewhere good. Justin and Mae have the ability to be really great characters, and I do intend to read the next one just to see where it all leads.


“But today? There was no walking away. Today, she was walking toward death, and that scared the hell out of her. Not much else did these days." ARC location 23

"Her hair is like winter sunlight, suggested Magnus, almost sounding lovesick as he whispered in Justin's mind. Still, it wasn't a bad comparison. Not quite gold, not quite platinum." ARC location 189