Tour Review: The Circle - Book One of The Sidhe by Cindy Cipriano

Welcome to my stop on  The Circle Blog Tour hosted by I am a Reader, not a Writer 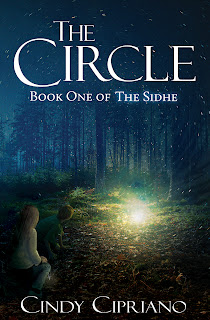 
The Circle Calum Ranson is sure of three things: his cousin Finley is alive, Calum will find him, and no one knows Calum and his family are Sidhe. No one until Laurel shows up at his mother's bookstore wearing a dark clan's mark. When Calum learns the details surrounding the disappearance of Laurel's brother, he suspects the evil Hobayeth clan. Calum and Laurel work together in the Realm of Man and the Otherworld to rescue her brother - revealing a connection between Calum and Laurel that may cost Finley his life.

Fairies in a Book Store and Pluto is a Fairy Planet

It doesn't get much better than that, folks. OK so this is a Middle Grade book that I enjoy as a lighter read sometimes in between adult reads. I also like to find good books for my son, and this one fits the bill.

I've always enjoyed fairies or the Sidhe and this book has a different spin on them which I greatly like. I also really found the thought of children as fairies to be a new aspect that I haven't yet read in books. Mostly, I've read pretty dark stories with fairies in them and although this one had some bad fairies as well as good ones, the overall characters were good in nature.

The setting is a book store which is familiar for me as a reader and fan of books. Calum works there with his mother during the summer vacation until he goes back to school. He meets a new girl, Laurel, who happens to believe in fairies and becomes fast friends with her even though she doesn't know his secret. There are missing children and other weird things happening in the background that keep the story going.

The writing was very well done and will keep anyone entertained no matter their age. There are quite a few characters to follow, but each have their own traits and are fun to learn about in their own right. The story itself is a new one and executed well with a few nice surprises.

There were some details included in the story that really had absolutely no impact, but seemed to be important while reading. I'm wondering if they will come up in future books because I thought they would be going somewhere in the story line and they were dead-end points.

As a middle grade book, there really is no romance to mention. Calum does get jealous of Laurel's apparent infatuation with his cousin Hagen, but they really acted more like best friends throughout the book than a crush of any kind. They had a nice friendship all in all though and it could lead somewhere in the future.

This is a magical, well-thought out and executed book about children doing all they can to save the ones they love surrounded by fairies and their own rules. If you enjoy light-hearted, fun reads then I would recommend you give this one a try. I also see children very much liking this one.

"You're kidding. We're going through that?" asked Laurel.
"It's easy, watch." Calum moved his hands in a sweeping motion. "Amplifico." Nothing happened. Calum blushed deeply. He was so anxious to get Laurel away from Donnelly, he couldn't focus. Got to get a grip on my nerves. He sucked in a deep breath and tried two more times before the tile stretched wider and taller, rising on its edge perpendicular to the floor.

"I think it's cute," said Tullia.
"It is," said Kenzie, "But they're growing up so fast. There was a girl we met during our last trip to South Carolina who thought Calum hung the moon."
"Hung the moon?" whispered Calum.
Hagen shrugged his shoulders.
"Of course, he was blissfully unaware of her attentions," said Kenzie. "Has Laurel said anything to him?"

Cindy Cipriano lives in NC with her husband, son, and 27 pets. Okay, more like one cat, three dogs, and many, many fish. Cindy is an award winning science teacher, who this past August celebrated her 12th first day of sixth grade.

a Rafflecopter giveaway
Posted by JezzebellJC at 12:49 AM