WARNING - THERE MAY BE A FEW SPOILERS IN THIS POST. Only read on if you have read The Hollows Series or if you do not mind being spoiled.

My choice is Trent Kalamack
The Hollows by Kim Harrison 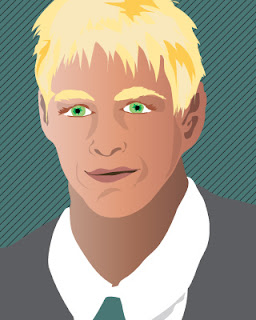 OK Please forgive me - I know this isn't the best picture I've done, but I had to do it on my lunch break at work because Zane had a double header Friday night. I promise, Trent is much more handsome than this.

Trent is introduced as a councilman that Rachel wants to take down so that she can get the I.S. death threat off her head. She finds out that he is dealing in brimstone so she sneaks into his office to get proof. On one of her excursions, she is a mink and he locks her in a cage in his office and then puts her in rat fights to teach her a lesson. To the reader, he seems ruthless and cunning and downright vicious at times throughout the series. Later on, he ends up fighting right beside her and is one of her most trusted allies. It takes a lot of books and a lot of pages before this happens, but he ends up being one of my favorite characters in the series. He will do anything for the people that he cares about which are few in number. I think he may also be a very misunderstood character, as we find out thanks to some chapters that Harrison provides us from his point of view. Even Rachel misunderstands him so often and thinks his motives are different than they are.

My breath slipped from me, almost a groan. Trent Kalamack. The obscenely successful, smiling businessman, ruthless bio- and street-drug lord, elf in hiding, and pain-in-my-ass-extraordinaire Trent Kalamack. Right on schedule. "Why is it you show up only when I need money?”

“Rachel knew what she was doing. And when she didn't, she could improvise on the fly, coming up with options that left a lot of collateral damage but usually only hurt herself, not the people around her. It was one of the things he would never admit that he admired about her.”


“Come work for me, and I’ll tell you.”
My eyes went to his. “You are a thief, a cheat, a murderer, and a not-nice man,” I said calmly. “I don’t like you.”
He shrugged, the motion making him look utterly harmless. “I’m not a thief,” he said. “And I don’t mind manipulating you into working for me when I need it.” He smiled, showing me perfect teeth. “I enjoy it, actually.”

“I’m not going to pick her up and carry her screaming to the basement,” Trent said. “It’s a workday. Besides, she has a crutch.”

“I mean,” Trent said intently, “she can hit me with it if I do something she doesn’t like.”

“Memories of ice and Trent surfaced, and I wrapped my arms around my middle. I had saved him, and he had saved me. What was wrong with us?”

Follow my blog with Bloglovin
Posted by JezzebellJC at 12:15 AM