Review: The Good, The Bad, The Undead (Hollows #2) by Kim Harrison 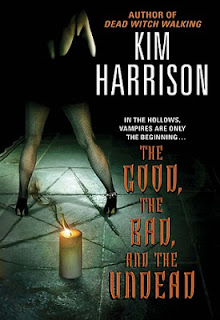 Goodreads Summary
New York Times bestselling author Kim Harrison has enchanted readers with her sassy, sexy, action-packed tales of the Hollows. And now in hardcover for the first time, the second adventure continues with

The Good, the Bad, and the Undead


It's a tough life for witch Rachel Morgan, sexy, independent bounty hunter, prowling the darkest shadows of downtown Cincinnati for criminal creatures of the night.

She can handle the leather-clad vamps and even tangle with a cunning demon or two. But a serial killer who feeds on the experts in the most dangerous kind of black magic is definitely pushing the limits.

Confronting an ancient, implacable evil is more than just child's play - and this time, Rachel will be lucky to escape with her very soul.

Quirky Characters and a Developing Story

I am re-reading to write reviews of this series, and The Hollows is one of my favorites.

I learned more about The Hollows in this 2nd book and a little more about each of the character's pasts. I really enjoy Harrison's ability to give me information just the right way without pouring too much on at once. I met Rachel's mom and heard stories about her Dad and the camp that she went to as a child for her blood disease. I learned about what Trent really is, and what his aura looks like (which does add more questions, but was great information). I found out why Ivy would leave what was for her a cushy job to start the business with Rachel. So many new truths were revealed in this one.

Then there are the characters. I am a huge fan of Jenks with his incredible ability to bring comedy to any situation. Rachel is the sassy, won't-take-no-for-an-answer heroine that intends to get things done. My favorite part of Rachel is actually that she is wrong often and it makes me jump to the wrong conclusions sometimes as a result because I am so used to the heroine inferring correctly. I enjoy being wrong and not knowing exactly what is going to happen in a story. Ivy, the vampire roommate and partner, is a different sort of character than I have ever seen and I look forward to watching her grow. Then there is Trent and Kisten whom I love reading about because Rachel can't seem to do anything but describe every tiny detail of their appearance and what they are doing when they are nearby.

The new characters in this one were pretty great too. Rachel's mom is a breeze of fresh air that tells it just like it is. Glenn seems like a stuck-up goody-goody upon first glance, but turns out to be a lot more well-rounded. Piscary is innocuous in the first impression, but ends up being pretty terrifying.

I wasn't fond of Rachel's inability to listen to directions like she feels she is above having to do what anyone tells her. However, this is also a part of this character's growth process and I understand that. Already by the end of the book she is listening a tiny bit better and letting people know more why she is doing the things that she is.

Also, I get tired of all the angst surrounding Ivy and Rachel's friendship. I understand the reasons behind most of it, but at the same time it is really hard for me to believe that the two of them would continue on the way they are with just how hard it is.

Nick...well I know that I am not supposed to like every character in a book. I haven't liked him since he was introduced in the first one. Rachel didn't even really seem attracted to him in that one, and in this one he just keeps doing dumb things like summoning Al and Rachel doesn't get near as upset with him or hold him to the same standards that she seems to hold everyone else.

As you can tell from my paragraph above, I feel Rachel thinks she is supposed to be with Nick so she ignores a lot of signs and warnings and goes with the program. While she was with Kisten and Trent, she describes every detail of how they look and what they are doing. There is one mature scene in the book, and this series in my opinion is not acceptable for anyone younger than a teen.

While I normally am not a fan of Book #2 in any series, I find this one to be an excellent follow-up to the first and filled with some great information to continue moving through the future books. The world is fantastic and one I haven't seen before with characters that are very different and have their own quirks. I would definitely recommend this one.


“Come work for me, and I’ll tell you.”
My eyes went to his. “You are a thief, a cheat, a murderer, and a not-nice man,” I said calmly. “I don’t like you.”
He shrugged, the motion making him look utterly harmless. “I’m not a thief,” he said. “And I don’t mind manipulating you into working for me when I need it.” He smiled, showing me perfect teeth. “I enjoy it, actually.”

“I told you, computers are like women. If you shout at them or ask them to do too many things at once, they shut down and you won't even get a sniff."

"You cry you get angry then you do something about it.”


“And I can't read your mind either, just your face.”

“You are your father's daughter,' he said, the skin around his eyes tightening. 'Trent is his father's son. Apart, you are annoying. Together...you have the potential to be a problem.”