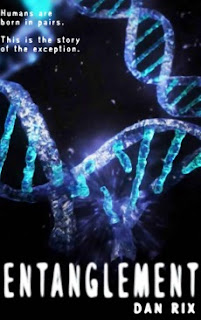 ENTANGLEMENT, a 75,000 word YA thriller, will appeal to readers of Michael Grant's GONE and Ally Condie’s MATCHED.

All About Halfs, But a Whole Enticing Story!

Rix contacted me and asked if I might review his book, and after reading the first three chapters on his website, I was hooked.

The story concept for Entanglement is fascinating. It is a concept that works and yet is still out of the realm for anything that is happening in the here and now. It is difficult for me to imagine a life where at the age of eighteen I would have met my half and gotten married, all because they were born at the same time as me. Difficult to imagine, but an incredibly interesting take on where our science could possibly go one day, so it is all believable.

Also, I really enjoyed being inside Aaron's mind for most of the book. I read story after story from the girl's point of view and this was stimulating and a unique break from what I am used to. I did get to be inside Amber's head as well at times, and really the spacing between was well done and the best of both worlds.

Then there was the mystery aspect which had me guessing, then changing my mind, then guessing again. I read so much that books can really become predictable and this one kept me on my toes.

There was a pretty large amount of cursing. One of the characters has a catchphrase that he says each time he appears in the book that in fact contains a curse word. While I find it funny when he says it, unfortunately I can't let my child read this book.

I don't want to give a lot away here because of the premise of the book. Aaron is approaching his 18th birthday and he is not looking forward to it because there are complications with his clairvoyant channel and his chances of having a half do not look good. When he meets Amber who is also not looking forward to her 18th birthday and already has a boyfriend, the book really starts getting good.

I literally could not put this book down. I had to force myself to go to sleep. I was way too curious about what on earth was going to happen and the ending did not disappoint. I was on my toes through the whole story and was really surprised by an invigorating read. I would definitely recommend this.


“But we're ok, right? Me and my half? I mean, I would have felt if something was blocking us."

"So much for forgetting about her. After that last sizzling look she gave him, that was going to be impossible."

"As if he's pressed a button, the strength deflated from every muscle in Aaron's body, and the last thing he remembered before losing consciousness was the pain, like molten lead dripping into his brain through the back of his head - that and wishing he'd had more time to live."

"And what if Clive and Dominic had already returned to find the well empty? They would assume he escaped and never check again. He has going to drown in this tunnel, alone."

"The machine roared. They looked up at the same time. Something was off."

Posted by JezzebellJC at 7:56 PM