Review: Every Which Way but Dead (Hollows #3) by Kim Harrison 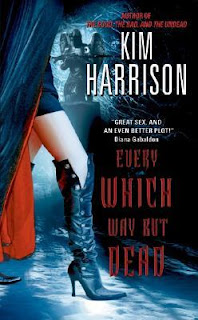 *Please note that it is very hard to review books past the first one in the series without having any spoilers at all. I will try to keep it as spoiler free as I can, but if you haven't read the second book in this series, you may just want to read that review instead of continuing with this one. The review for the first book in the series is here.

There's no witch in Cincinnati tougher, sexier, or more screwed up than bounty hunter Rachel Morgan, who's already put her love life and soul in dire jeopardy through her determined efforts to bring criminal night creatures to justice.

Between "runs," she has her hands full fending off the attentions of her blood-drinking partner, keeping a deadly secret from her backup, and resisting a hot new vamp suitor.

Rachel must also take a stand in the war that's raging in the city's underworld, since she helped put away its former vampire kingpin - and made a deal with a powerful demon to do so that could cost her an eternity of pain, torment, and degradation.

And now her dark "master" is coming to collect his due.

This series is definitely one of my favorites. I am re-reading and reviewing, and will rate each book on it's own merit.

When The Good, The Bad, and the Undead left off, Rachel had beaten the dead vampire Piscary and promised Al to be his familiar in exchange for his testimony to put Piscary behind bars. This one starts off strong, with Rachel calling Al to pay up what she owes and continues to the end with action.

Harrison is doing a wonderful job rounding out these characters. Don't get me wrong, they aren't polished yet, but there is continued growth. Rachel is becoming a stronger witch and I am a fan of her getting more powerful. She learns how to throw a circle without drawing it first, and she learns how to hold ley line energy in her head. Also, she is impressing people left and right with the size of the circles that she can throw that would normally take 3 witches or more. Ivy is a practicing vamp again so she is a lot more laid back. Jenks is as funny as always, but has his own problems that he needs to work through.

Now the new characters that were introduced are interesting with a side of mysterious. They range from Ceri, Takata, David, Lee, Erica, Skimmer, Ellasbeth, Newt and more. OK with these new ones, my favorite on the scene is Ceri. She's demure and regal and quickly becomes more demanding and sure of herself. She also has a very long past that is unclear. Next is Ellasbeth for pure fire. She is someone that screams, "Hate me!" Harrison is really good about having Rachel dislike a character, but I don't necessarily dislike them with her; however, we both fully dislike Ellasbeth.

Then there are situations that I can't even fathom how she comes up with them. Where did the wishing fish come from? Not sure, but it was a great way for David the werewolf to come on the scene.

The part with Jenks upset me quite a bit. He was gone for most of the book...

Wow was I glad with the direction her romance went in this one. I will say that Kisten and Rachel have fantastic chemistry. She has been drawn to him since she set eyes on him and she lost the fear when she kissed him in the elevator. Then she got closer to Trent, crossing the barriers they had in the previous books and diving under the surface to get to know him better. While they are in no way friends yet, I really enjoyed watching their interaction and the walls come down a little.

So far in the series, this one beats out the other two. The books are just getting better and better. The world is getting broader, the characters are growing, and we are meeting new and interesting characters as well. I absolutely recommend this.


“The only thing more unstoppable than fairy assassins were pixies. They could rule the world if they wanted to."

"Trust is a feeling we don't get very often, Rachel. Living vampires lust after it almost as much as blood. That's why Ivy is ready to kill anyone who threatens your friendship."

"I couldn't think. There was nothing but hurt in me. I was burning. My very thoughts, my soul, were burning."

"'She saved my life,' Trent said softy. 'I don't care if you like her or not, but she has earned your respect."

"My God. The two played mind games with each other as if it was an Olympic sport."

Posted by JezzebellJC at 9:31 PM